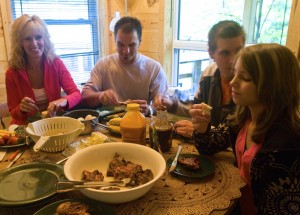 My life at the cottage is a feeding frenzy. I’m always amazed at the multitude of ways to pig out. Normally I control overeating by not dining out, not shopping too much, not having free time and over spending at the cottage. If all else fails, I do the cooking.

But cottage life is conducive to frequent socials, bounteous feasts and serious gorging. Simmering aromas and gourmet spreads only serve to tantalize taste buds in anticipation of the next banquet. Each overindulgent partaking requires therapeutic recovery in a lazy hammock until the next dinner bell. Despite sure-fire cottage diet techniques like forgetting the steaks, burning the burgers, getting flies in the salad and bugs in the baking, enough succulent dishes make it through to choke an elephant.

Then, as if I can’t be counted on to do enough damage of my own, there are folks trying to force feed me…

Lots of Pigging Out…

One bloated day as the wife and I were recovering for dinner, she noticed something in the paper called a Strawberry Social. Never having met a fruit socially, we attended the event at a local church in the hope that reverence would curb excess. Not. “Feed the hungry” became our rallying cry as we gained entrance to a veritable cornucopia of homemade culinary delights. Laid out buffet style so no servers could slow down our collective gluttony. A paradise of casseroles, salads, roasts, breads and cold cuts displayed for the more than once taking. It was all I could do to drag myself over to meet some of those strawberries for dessert. I’m nothing if not polite.

Once hooked, we ate our way through weekends of gastronomic indulgence. A turkey supper here, a beef bar-b-cue there, here a pig roast, there a pancake breakfast. Bake sales. Corn roasts. Roadside snack shacks, veggie stands and chip trucks. And in between, becoming acquainted with numerous strawberries. Not for snow alone did we switch to four-wheel drive and heavy-duty suspension.

Our Waterloo came with an invitation to a ‘wild life’ bar-b-cue. Expecting the rural equivalent of a frat party, we arrived in our wildest attire and demeanour. Aside from a game of horseshoes where I threw a ringer on some guy’s ankle and a sack race where I jumped out of my shorts, I was disappointed. So I sauntered over to the fire pit where several hunks revolved. As they circled, meat was basted on a slow-turning spit with great sloppy paintbrush strokes, occasional geysers of well-shaken beer and vats of marinade.

“Roast beef,” I inquired? With relish, they identified the main course: “That big one’s bear”. That flank’s venison and the small one is beaver. There’s squirrel and rabbit and coon. Wanna sample?” Unable to contain my enthusiasm, I declined the offer and hurried over to the wife who was also eyeing the meal longingly. “Roast beef,” I confirmed. “Use lots of relish.”

By dinner, everything was cut and carved and burnt to sameness, so I never did discover whether I’d gnawed on Smokey or Bugs or Bambi. I kept my mind focused on Elsie. The wife, connoisseur extraordinaire, commented on the subtle taste differences from one cow to the next. Grain versus grass fed, I explained with relish. So ended our smorgasboarding frenzy. Every groaning board has its delights and disasters, treats and terrors. And juggling two heaping plates makes it tough to differentiate the two.

So for every prize-winning family recipe there was always a bite or two that I spat into a handy napkin. From a dish that no one would ever own up to. Also, it’s a challenge to socialize with your mouth full. Even with strawberries.

Somehow the wife later found the truth about the wild life. Since she prefers to know exactly being eaten, we dine in a lot these days. We may not have the choices or the bounty, but can get through doorways again. And we socialize with our own strawberries.