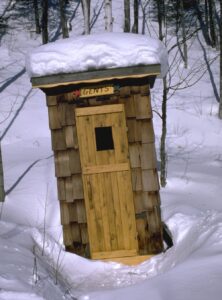 How does that song go? “That little brown shack out back so dear to me”? That singer knew whereof he sang. When modern conveniences don’t measure up to the task, it’s either that out back shack or a swift visit to the bush for me. I’m still picking out the thorns.

New outhouses are rare. Like the sun, they’ve always been there – sad, dilapidated, neglected relics made obsolete by technology. Even new ones rapidly acquire these characteristics once confronted with their true purpose in life. Mine is a shabby, claptrap affair hidden in plain sight and left-leaning as if constantly in search of fresh air on the prevailing wind. Either that or its slowly sinking into a hole.

Outhouse ventilation is unique and essential. In mine no joint joins, a fact used to excruciating advantage by both insect hordes and Arctic winds, albeit in different seasons.

Typically, if there’s a door and it closes, it doesn’t fit. So the hook or wood block latch can’t secure it against interruptions. So I’m always straining on the edge of my seat for the sound of urgent footsteps or a glimpse of a rushing body so I can holler an occupation warning. For whose sake I don’t know, but it adds excitement to the daily constitutional.

I Approach My Privy with Trepidation…

Mostly because it’s my system of last resort. All others are occupied or have failed except my own which is about to. Perhaps I’m reluctant because I have to dress to go. Maybe because nothing human has been in there since my last crisis. Or because it’s inevitably the dead of night and I can’t find the flashlight or the toilet paper.

But my desperation is caution tempered. If I catch a sniff of a whiff on inhaling, I know it’s got to be a quickie – business done in one lung bursting breath, with no noxious intake. I reconnoitre, a stealthy approach culminating in a banshee scream and a smashing palm slam against the right wall to announce my entry intent to even the most firmly ensconced critters and creepy crawlies. The neighbours say it works on them.  But that lean to the left seems more pronounced each time I bang on the side. The wife says we have an NDP outhouse.

Before entering, I strike a match to check for cobwebs, eye reflections, nests, gas fumes and gnawed things. Like the toilet paper or the seat. Also for what has to be moved for access – gas cans, deck chairs, lawn mower, garden tools and a tangle of hoses that would bewilder Houdini – evidence that the wife has turned my refuge into a storage shed. And to make sure that nothing new has fallen into, or is about to emerge out of the pit over which I’m about to lower my exposed nether self.

If there’s still a door and it closes, it won’t latch because it doesn’t fit. Choice dictated by urgency, I sit. In winter, hopefully on a Styrofoam seat. If not, then on my hands, a particularly vulnerable position acquired from the wife who ended her privy days when she couldn’t fend off an inquisitive horse poking its head inside. Besides in summer, I need hands for swatting.

Except by desperate folks, outhouses are under-rated. They keep us out of the bush, preventing embarrassing poison ivy rashes. They are sanctuary during marital spats. Safe havens for the flatulent. Two-seaters provide commune for the social and nature lovers can study rodents and insects together. You can sneak a smoke there or catch up on old catalogues. Avoid line-ups. Deek out of work. They help us take modern facilities less for granted. They always function. And no one cares if I leave the seat up.

Often of a winter I’ll leave open the door that doesn’t close, fit or latch and gaze up at the clear, starry sky while conducting my business. Astrology on Styrofoam. In summer, when I’m not swatting, squirming, straining, searching or sneaking, my little brown shack can be my island of tranquillity.

Unless I run out of paper again. Then everyone ignores my screams for help, so it’s out with the catalogues, although that glossy paper just isn’t the same. I try to use pages I’ve already read. They’re just not the same after.

The wife has no privy appreciation. She stoically refuses their use and has developed unsurpassed bladder control. I can hardly wait until our indoor plumping breaks down. I’ll tell the plumber to take his own sweet time with the repair.