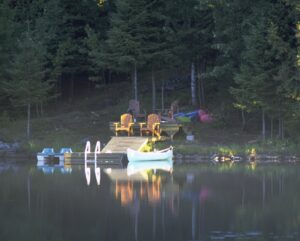 Do we have too many cottage contraptions? My cottage is a retreat, a refuge, a return to nature. It’s where I can escape life’s little hassles and dedicate myself to the pursuit of pure recreation. Which means that it’s also the repository of an associated armada of assorted recreational contraptions co-owned by the bank and I.

Cottaging has been the vehiculariztion of my life. Before, I was a one-car guy. Now I have more motors and tires and conveyances than a wrecker. It began innocently with: “Honey, maybe we should think about four-wheel drive.” and has been an unending contributor to the national debt ever since.

Snowmobile for the Cottage

The wife’s “maybe’s” have always cost me big. Initially, we snowshoed that last mile of unploughed winter road with our two Huskies harnessed to a loaded toboggan. Arctic charm marred only occasionally by the overly enthusiastic mutts, who would take off past the cottage and have to be tracked down somewhere out on the frozen lake. I  learned to whisper “Mush!”

This idyll shattered the Friday it snowed so deep I had to break trail for the team, a sweaty nightmare of unbelievable proportions punctuated by my convulsive gasps, excited dog yelps and the wife urging me forward with the enticement that “Maybe we should think about a snowmobile, honey!” Fourteen sleds, three trailers and two new four by fours later, even the dogs expect a ride in.

Master of The Fleet…

Ours is a small spring fed lake with loons and serenity crying out for canoe rides in the morning mist. So was the wife; we bought a canoe. Which to my dismay came with only one paddle, a deficiency the wife and dogs greeted enthusiastically. So it was always me huffing and puffing in the back while they lollygagged with their collective noses in the air and eyes on the (slowly) passing scenery. Like Cleopatra on the Nile. Except for a slight balance problem when dogs spot squirrels ashore.

I don’t know when a watercraft collection qualifies as a fleet, but mine had its genesis in my attempt to switch from manpower to horsepower. I acquired a 16′ aluminium boat with carpeted floor insert to replace precarious canoeing and weary paddling. The wife had fond memories of sailing, so came a masted craft. Then paddleboats enticed women with visions of sucking back mint juleps under awnings while floating lazily down the bay. I think I heard the word “exercise” used too.

Then some ingrate guest complained about no water skiing and the wife says: “Honey, maybe we should think about a ski boat.” Then came a party barge. PWC’s. A bass boat. What with all that new docking, boat housing and insuring, I required a fleet discount on my loans.

Aside from wives, seasons are the other costly cottage factor. What ever happened to all-purpose vehicles? But oh no, there’s summer and the fleet; winter and the sleds. Off-season ATV’s and an Argo. Each requiring special trailers, care, parts, training, storage, accessories and operating conditions. The only common ground being cash

But that’s not the end! A tractor for roadwork, snow ploughing and stuck vehicles. An old pick-up for hauling and salvage. Riding lawn mower. Mountain bikes. A kayak. Trolling motor. Sail Board. Dirt bike. And an array of inflatables capable of evacuating Dunkirk. Or at least of causing mass hyperventilation.

I’m no Mr. Fixit, so I’m always trailering something somewhere for service, repair, and replacement or simply out of habit. Between their seasons, things are drained, stabilized, raised, overturned, leaned, cleaned, chained, locked, blocked and dry-docked. I have a wall of mysterious keys, a can of mismatched duplicates and a pocketful of ones I’m always trying to find an ignition for. The place is dotted with bright orange, tarped mounds. Why can’t they be camouflage coloured so my grounds don’t resemble a Ronald McDonald playground? Why do I have to uncover them all to find what I need? How do I tell them apart from the woodpiles? And when will someone make a seasonally interchangeable vehicle? Maybe that’s what feet are for.

As my neighbour lands his new seaplane, I am surrounded by fleet and debt, frozen to indecision by so many mobile options for the day. The wife looks up from her magazine and says: “Here’s an interesting ad, Honey, maybe we should think about a hovercraft.” Why not, we could park it beside the submarine.