Man for all Seasons 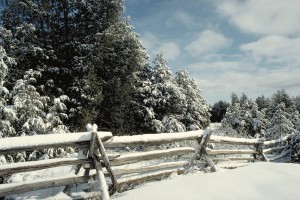 I’m a man for all seasons. For many, the cottage has become a year round second home. Some have retired there. Others have moved in to live and work. Most still commute. A few have even gone to ground and simply disappeared there. Usually they are dead first.

For the wife and I, the cottage is our first home, with unfortunate weekday excursions to the city. Our intent had been to buy a weekend getaway where we could enjoy our favourite season, winter. We actually considered renting it out during the summer. Although we learned to like our summers too, the result is a snug all season home.

It’s beyond me how anyone can own a cottage and only use it from Victoria Day to Labour Day. Do they ever see the colour rioted, winding-down days of autumn or the pristine-crisp starkness of winter or the surging urgency of spring thaw? Each is as exciting, as unique and as beautiful as the others, yet each so different.

Summer cottaging is like always eating the same part of the meal. Like you and desserts says the wife. Summer’s popularity must reflect Canadians’ search for heat and insects. For some reason, many wish Ontario were Florida. Maybe it is, with a fantasyland called Queen’s Park. As if October through April is penance for some great collective sin, like voting NDP again. As if suffering cold somehow earns summer. But if that means ninety-degree heat, high humidity and insect hordes, then I’ll take the other seasons, thank you very much. And I’ll be as warm as I want to be – or as warm as the wife wants to be. Without ever heading south. 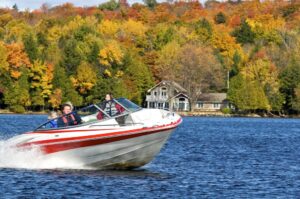 Have you ever noticed it’s much easier to get warm when you’re cold than it is to get cold when you’re warm? That’s why I find the other seasons more comfortable. I can control my personal climate. And in doing so, achieve a level of activity, acuity and awareness precluded by overheating. In other words I’m lazier, dumber and zonked out in summer. The wife says she hadn’t noticed any difference.

Advances in heating technology and space age fabrics for warmth and dryness exceed those made for keeping cool. Air conditioners aren’t portable, cost lots, make noise and damage the ozone. So what else is there for cooling except for the old stand-bys like sitting on a block of ice or swimming in a tepid lake or drinking ice tea until you spring leaks or wearing no clothes at all? None of which can withstand heat waves or prudish neighbours.

The wife was not a winter person. But she also hated heat and bugs, so she was essentially seasonless. But being unable to solve heat and bugs, she came to the realization that winter was only a problem because she’d always been cold. For some reason, being cold seems to bother women more than men. Or at least they are more prone to getting cold. Or get more cold when they’re prone. Anyway, it’s hard to have fun while freezing. I know mine comes to an end when I get her icy eyeball.

Soon after I introduced her to high tech materials, layering and an unlimited bank account, the wife embraced winter with a passion. I even got a hug or two. Our cottaging now encompasses all seasons. Instead of that finite, three month summer window that restricts the view of many cottagers. We share nature’s complete panorama, have countless extra days at our camp and get optimum use of our property investment. Now it deteriorates right before our very eyes instead of falling apart by all by itself. Sounds like a marriage.

There’s a special rhythm to year round cottaging that’s somehow smoother, less frantic and more satisfying. The non-summer months are also less crowded, chaotic and comparatively traffic free. When ‘the season’ ends on Labour Day, life at the lake returns to normal. You have to be there to appreciate it. We avoid the high cost of Florida vacations, we’ve more active socially and we’re there all year to keep an eye on things. We never worry about what to take because everything we need’s already there. We just get in the car and go. It could only be more perfect in never having to leave.

So as summer ends and I begin to get my Ski Doo snowmobile ready for winter, I urge you to consider making this the first year you don’t close the camp. Or making a special effort to return in each of the other seasons. You may be surprised to discover a whole new world that’s yours for the taking. Of course, I knew that all along, Intrepid Cottager that I am.