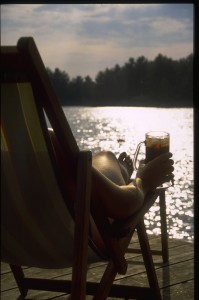 The cottage idyll locked in my mind’s eye is lying back by the lake doing sweet nothing with a cool one to while away those long, hot, lazy summer afternoons. I’m still trying to find that cottage, but the wife can be coolish at times.

At my cottage, I can hardly sneak an idle moment alone for the hours of partying, socializing, playing and maintaining the various apparati thereof. Something is always broken or about to be. Misplaced, mistreated or just plain worn out. The wife has her lists for me, the kids leave a hurricane trail behind them and there’s always a neighbour to whom I owe a return favour. Things cry out for attention every time I lower my weary self into the lounger. The guilt’s almost enough to make me get up and stop dreaming of doing nothing.

My Do Nothing Weekend…

Last summer I declared a “do nothing” weekend. The wife wanted to know what would be different. For one, doing nothing requires work. There’s the organization and assembly of everything that’s good for nothing. All the stuff I would need close at hand so that doing nothing wouldn’t be disturbed by having to do something.

Next came the crucial location decision. Too near and I would be in the centre of the action I was escaping. Too far and I would have to do too much whenever I needed anything. Sun or shade? Deck or dock? Within range to call for service or too distant to be called? The wife, who rated my chances of doing more nothing than usual as nil, suggested the deep woods. A cool one, for sure.

On my nothing morning, I got up early to stake my territory and practise doing nothing before there was anyone around who I might be tempted to do anything with or vice versa. By the time I was awakened in the bright sunlight four hours later by a dog lick on the lips, I had succeeded in doing nothing but turning exposed flesh lobster red.

It used to be that I could be out in the sun all day and no one cared. Today, people yell numbers at me if I even look at the sun. So I had an array of tanning products at my side that would put George Hamilton to shame. At least on my unbaked side. Start with a little pre-conditioning moisturizer and then go to that conditioner. Then use screen #197 every five minutes or until you sweat, except on your face where you need #49 ‘soft’, but remember to zinc nose and ears. Use a lotion here, a cream there and oil wherever else.

Although I was too late by a half, I made application as instructed with the result that my beer kept slipping through my fingers and my body sliding down the chaise lounge.  I moved to my hammock in the shade and settled in with a great contented, greasy sigh. And promptly became the main meal prospect for a pair of horse flies or deer flies or whatever – I never saw them around any animal, only me. Doing nothing became relative as I twitched, shook, wriggled swatted, flailed and otherwise tried to end their mealtime prematurely. I threw water, sand, a branch and smashed my book at them. All I got was tired, wet, dirty and a bug squished on an as yet unread page of my book. Lord of the Flies.

Ever sympathetic and cool of comment, the wife brought me a horse blanket and a bug hat. Perhaps it was blanket-induced heat prostration. Maybe not being able to drink, eat or see through the bug hat’s screening. Or the fly trapped inside. Or perhaps it was the sound of everyone else having so much fun nearby. Whatever, I began to fidget. And itch. Squirm and sweat. Doing nothing was wearing me out. Never have so few done so little with so much hassle.

As I trudged back to the action with my do nothing stuff, I was greeted by exuberant cries of “He’s back! Let’s throw him in the lake!” Nothing doing.