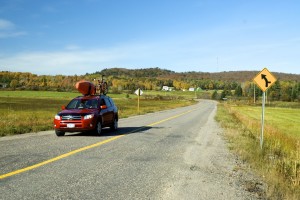 Where’s the roadshow? My realtor tells me that location is my cottage’s big advantage. But that’s a matter of perspective: Getting to where it’s located can be a pain. Kind of like trying to remove a sliver from your own butt. The wife says I should be more careful where I sit.

Which is tough when you’re in the car for hours getting there. I serve my weekly sentence bravely, sometimes in onerous frustration, but often in heightening anticipation. The wife says to go before I leave home. Am I supposed to sit or not?

Which Half the Fun is Getting There?

I try to make cottage drives fun. The wife says, “Fear is not fun.” and takes over at the wheel. What  am I supposed to do, play “I Spy” as the wife mutters at every truck or van she gets behind?

Fearless fun options are limited in a moving vehicle. Especially one as slow as the wife drives. There’s dreaming, thinking about old jokes and watching others, but the wife says that makes her nervous so I look outside into other cars instead.

It’s amazing how people have a false sense of being alone in the world when hurtling along the highway at a hundred kilometres an hour. Of course I wouldn’t know because I never go that slow, but others seem to be completely oblivious to my bug-eyed penetration of their privacy. A highway peeping tom, all I need is partially closed drapes and a bush to lurk behind. The wife says that the binoculars would still be a dead giveaway.

Drivers fall into several distinct categories aside from those who can and those who can’t. Commonly known as myself and all the rest. For some, the automobile is strictly efficient transportation. These drivers have utilitarian vehicles and wear focused, concentrated expressions. Trailers, roof racks and back seats are piled with stuff. I mean, why waste a good trip, take the whole family? They are also most likely to be those van people blocking the wife.

To others, the car is a means of self-expression, an extension of personality, an alter ego. And I thought that was a cleric with a swollen head. These drivers are characterized by fancy, souped up models; a distracted, holier-than-thou manner and Givenchy luggage. It’s interesting to watch them juggle their car toys and they are prone to respond with rude finger signals. Hey, I was only stretching my middle finger!

Usually, I see them bopping along to inaudible music, looking like seizures under glass. At least I hope their stereo’s on. Some sing-along wildly like a silent karaoke movie. Others have a cellular wedged into the crook of their neck, gesticulating madly with no hands on the wheel. We used to call them passengers.

Many have vanity plates with cute coded messages that make you drive too close to figure out. Some have tinted glass to hide their most private scratchings, pickings and facial exercisings. I wear sunglasses for that.

On summer weekends drivers become traffic. Radio stations launch planes to report on it, police lie in wait for it, and tow-truckers pick up its pieces. There are no highways wide enough, no speeds high enough and no routes secret enough. All roads lead to my cottage and they are all full. It’s not only volume that gets me; it’s also lack of consideration. It’s too many folks trying to get there before me. It’s too many rubber-neckers backing things up for miles to check out someone taking a roadside potty break. Yes, the wife did tell me to go at home.

That’s not all that gets me… It’s also puttering under the speed limit, unexpected lane changes, tailgating, driving on the shoulder and not keeping to the right. It’s also breakdowns, running out of gas and stopping to pick dandelions. It’s driving inattentions, like reading or putting on make-up or eating or playing tug toy with Rover. Or how about two lovers sitting in the driver’s seat at the same time?

It all amounts to driving as if there were no one else on my road. No wonder there’s more fear than fun. The wife says we should try that driver’s seat thing sometime. Happy drivers have more to live for.