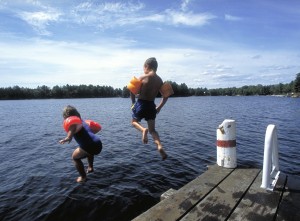 Water is essential to cottaging. Without it, diving, skiing and swimming would be painful. There’d be no shoreline to build beside. Docks wouldn’t flood or boats float. Fish would have legs and loon cries would be truly forlorn. Whoever he is.

Like most, I took water for granted. Then I bought a cottage and became aware of the high regard in which I now hold my water. And just as there is more than one way to cross your legs, I discovered water’s many kinds…

Most obvious for cottagers is lake water. That’s the large wet spot the cottage overlooks. This kind is used for recreation, travel and scenic pictures. It’s where fish swim, beavers defecate, worms drown, plants rot, and organisms die. Which explains why I want another kind of water to quench my thirst.

Although water tests were positive, holding a glass of lake water up to the light revealed a plethora of swirling particles. Wanting to drink, not chew, I installed filters. Now my tap yields the drinking kind, the bathing kind and the dish washing kind. The wife says I should be so kind.

Standing water is like sitting water except higher. But both are the stagnant kinds that produce mosquito hordes. One step removed from the swamp kind, which is gaseous, nauseous and yucky. ­Like me after a chilli pig out. This inert water has a tendency to be stale dated yesterday, be of slimy consistency and the colour of the Incredible Hulk. Which may explain where he bathed. And why he’s always so mad. Probably has to wash dishes too.

Moving water is how it gets around. Spring run-off, streams, creeks, rapids and falls. Also, flooding, pumping, splashing, and canteens. The moving kind is generally a good thing unless it breeds black flies or is in your basement. Or makes you seasick.

Dam’d water is not opposite to holy water. Beavers, hydro, flood control and locks are all dam causes. Which produce high water and low water, two kinds not so bad alone, but dangerous when mixed unexpectedly. So that first step into the boat can resemble falling off a roof. Or cottagers can fight over water levels. Or boats can be stuck in the bottom mud. And I always thought level changing was caused by the earth leaning into another turn.

Well water is not cured. Most folks bypass the lake kind to get their drinking kind from the ground kind, otherwise known as the well kind. Usually reliable unless it runs dry, is polluted by excess run-off or the submersible pump breaks down. If uncovered, well water can become the stinky kind as one neighbour discovered when an itinerant skunk went for a swim by mistake.

In the winter, most water becomes the frozen kind. It acquires the power to shift boathouses, crush docks, raise pressure cracks and support thousands of angling feet. It also bridges snowmobile trails and opens up access to the wilderness. The wife prefers this kind melting in her drink. Instead of melting her into the drink.

Rain water is downpour residue. Usually wrung out of the clothes I was caught in. It pools on tarps, in depressions and in open containers, causing mud puddles, drown mice and road rutting. It’s never turned me on like that, but then I prefer my sex indoors.

Acid rain water is a close cousin that comes mostly from the States. Emergency water is the kind I hope will pump out of a fire hose. Any of the other kinds will do in this situation although some are more liquid than others. Emergency water is better pumped than passed by bucket. Then it becomes heavy water.

Water is more complex than I imagined. The wife says that’s because I never had to work to get it. Or keep it. It’s just always been there for the taking. Now that I’m more water aware, there’s one kind I’m trying to avoid. The polluted kind.