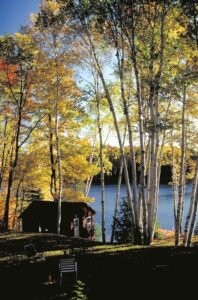 Friends building a new home once asked me for advice about the pros and cons of cottage basements. The wife replied that someone should learn from my mistakes. But we agreed on the necessity of a basement. Wasn’t there some biblical chap in a quandary over whether to build on sand or rock or some old dumpsite? By digging a basement, he could have had a solid foundation, a place for his junk and a church with a rec room too. When my friend questioned a cottage basement’s value, I gave him my basement theory.

Most basements are taken for granted. But where houses were built over root cellars or crawl spaces or dirt excavations or nothing at all, residents have a void in their life. And a pile of junk cluttering up some other area in their home. Having a basement is a sign of substance, of forethought and of having an easy place to dig.

Basements signal longevity. Commitment. They are a home’s roots. A building with a basement is truly a year round house. A permanent dwelling. A serious place to live. A real Canadian home. It’s also where many men spend their married lives. Cottages are often basement-less. Some were knocked together as hunting shacks and get-away spots, barely better than hard-sided tents. They rested directly on the ground or were raised on rock piles or concrete blocks or old stumps. There’s some lack of substance with a building you can look under and see light out the other side. Except for the porcupine silhouette in between.

Some places have the door, but no basement. Wishful thinking I guess. Many cottagers try to fake a basement by closing in their open sides with latticework. This creates a dank, dark, cobwebby space underneath where critters live and the only way to crawl is fast. Women won’t go there and men make an annual pilgrimage with the same enthusiasm as greeting the arrival of a carload of unexpected relatives. The wife says that describes all of mine. None of hers look anything like I expected, but I’m safe because they don’t drive.

Those with ambition and cash decide to raise and excavate under the existing structure. Which can lead to a basement worth more than the shell. One neighbour decided that dynamite would be faster. By blasting out the rock underneath, he would end up with a new basement, with or without a building on top. Our local master blaster carefully laid charges, covered with enough old mattresses to either contain the blast or provide a soft landing for sky-high house remnants. After the warning shout of “Fire in the hole!” or maybe it was more like “Everybody run like hell, it’s gonna blow!”, there was a disappointing, muffled crump and a balloon of smoke as the building lurched and settled back into perfect position apparently none the worse for wear. And from somewhere inside, the owner’s wife called to ask if anyone wanted tea. Only in Canada, you say? Pity.

Recently, more cottages are being built from the get-go as permanent homes with full basements. This ensures all season return on investment and reflects a desire to put down year-round roots in the community. It also recognizes the amount of paraphernalia it takes to operate a successful cottage. And the number of wives who want a safe place to keep their husbands.

When I went cottage hunting, I hadn’t given a basement much thought. But every place without one somehow seemed inappropriate. So I ended up with a basement that I love. It’s insulated but unfinished to utilitarian purpose. Large double doors provide access for a constant stream of machines, lumber, wood, supplies, people and animals. There’s a concrete floor. Exposed plumbing, fuse box and wiring for more easy access. A bench where work is never done, a wood stove that creates subterranean Hades, a sauna to cool off and lots of open space. It’s a man’s place, undecorated, Spartan, crammed with tools, parts and many items that might come in handy someday. The wife says they should be kept at the dump.

My basement makes house a home. Holds it up, warms it, keeps it off the ground, cools it, keeps it straight and prevents critters from setting up shop there under. It’s my receptacle for stuff, a repository for my never-ending work in progress, my refuge from responsibility. It’s where I go when snarly. It’s my status symbol, my alter ego, my . . . The wife cuts me off in mid-soliloquy. Leaning over to my friend’s wife, she advises: Just build the basement, it will keep him out of your hair.” So much for my theory.