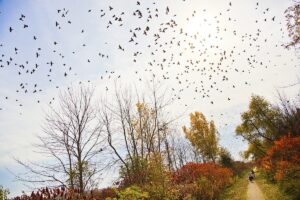 Welcome to my life in the drop zone. God may see the little sparrow fall, but all I see is droppings. I don’t know if it’s my wider girth or an unlucky fate or an invisible bull’s-eye inscribed on the top of my head, but birds love to use me for target practice. The wife says it looks good on me.

I can be walking along in the middle of a downtown street or hiking on a remote country path. I can be standing in the yard or reclining on my hammock. Heck, I think I could even be sleeping indoors and they would locate me with their pinpoint radar. Unwelcome splats herald the beginning of yet another aerial bombing run. It’s like living in a vertical shooting gallery. And I’m the easy mark. The wife says in more ways than one.

Ground Zero is Me…

Although I don’t take many direct hits, there’s always that chance. Besides, unless there’s been a giant condor overhead with a full load on, I often don’t feel anything hitting my clothes. Not until some joker guffaws at the evidence on my shoulder or splattered down my back. I wish the wife would be more discreet.

In dire anticipation of this extreme consequence, I find myself hunched over against the possibility, scurrying from place to place with my baseball cap pulled down tight, never looking up.  I never know which way to wear the peak, exposing either face or neck. If backwards, kids think I’m hip, adults nuts. If forward, police eye my suspiciously as if I’m a furtive type with something to hide. Either way, because I always seem to be bent over searching the ground for lost change, folks assume I’m hard up. The wife says that’s not why.

I don’t have to be present to attract the guano gallery. The flocks flock to my trees, chirping merrily with their tiny little legs crossed until I emerge. Then it’s anchors away. Loose the payload. Drop the doo-doo. Never have so many dumped on so few.

I’m a bird watchers’ paradise. My dock gets pasted regularly by strafing seagulls. My walk receives special Canada geese overlays. Whole V’s of migrating fowl swerve to get me. If I put out a rock marker, it soon becomes a feathered lavatory. I’ve even been precision bombed from high level by circling hawks. I thought they were supposed to be tuned to mouse movements, not their own. Even my innocently parked vehicle will receive more night deposits than the local bank. I’d be a rich man if poop were currency.

I’ve tried various tactics. Like wearing muted colours, staying away from trees, or evasive maneuvers. Or like sending the wife out first as a diversionary target. Wearing an umbrella hat. Crawling out with my dogs as part of the pack. Disguising myself as a cat. Or walking on my hands. I’ve even thought about wearing a nest on my head in the hope that birds wouldn’t fowl (sic) it. Or putting a constipating agent in their feeder. The wife says it works on me.

Now that almost every bird is part of some endangered species or other, the airborne assault is intensifying. Alfred Hitchcock’s “The Birds” should be remade with people fleeing in terror from droppings not peckings. Or would it just be me?

Isn’t it about time for society to take action? We’re being inundated with unfettered unloading. How come I never see any dead birds? What happened to toilet training? Aren’t they getting enough fibre? Why don’t birdhouses have facilities? What about fines for failure to swoop and scoop? What about designating target areas such as large statues? The wife says that bull’s-eye’s already wherever I am.

No one seems to care. Or take me seriously. Except the dry cleaners that keep a special stain remover handy just for me. Am I being overwrought? Wound too tight? Hysterical? No, says the wife, just having another bird.