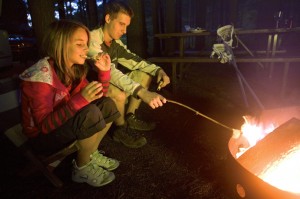 There’s nothing like a campfire on a hot, muggy summer night. I don’t know how this cottage tradition started. Maybe it harkens back to some pioneer communal thing. Or to fond memories of youthful camp singsongs. Perhaps it had to do with burning garbage. Or dinner. Maybe it was to scare away night prowlers. Or perhaps it’s just a way to get rid of punky wood. The wife’s always saying: “Wouldn’t it be nice to have a fire tonight?” I guess that means I’m bar-b-cueing again.

Do’s and Don’t’s of Campfire Pits…

Cottagers who campfire often have pits. Other than arm, that is. I mean one can’t just wander around at night lighting campfires at whim. That’s arson. The wife asks me to leave the offspring out of it.

Locating your pit can be tricky. It’s no good under low hanging branches. Not unless you’re ready for the world’s largest evergreen candle. At least the fire department volunteers had no trouble finding me

Slopes can be dangerous. One log too many and the whole blazing mess can tumble downhill as a fireball. And woe to anyone perched precariously in the way. They say my pants were actually flaming when I hit the water. And my deck was a write-off.

Proximity to major root systems is a taboo. Wood burns as readily below ground as above; smoldering late night embers can be underground fire starters. So I keep the sprinkler on during campfires. It soaks the earth and discourages mosquitos too. Folks have got used to bringing their umbrellas.

Much as it may reduce darkness-induced toe stubbing, refreshment dropping, doggie doo stepping and marshmallow spilling, I can attest that the pit should be far from the cottage. Prevailing winds can change quickly: the wife says she can still smell the smoke in the bedroom. She does the to-ing and fro-ing now anyway. At least until I get the cast off my toe.

Pits should be sheltered. A wind that fills a bedroom with smoke can also blow live sparks onto dry tinder. My trusty hat must have been really desiccated to go up like that. I did a double toe stub on the way to the lake.

A cramped campfire is no fun. By the time every neighbour, guest, relative and mosquito gathers around – attracted by drink, food, freebies and blood respectively – their chairs could fill a baseball diamond. Except for the mosquitos, who would look silly dragging chairs from flesh to flesh. And folks need to have room for the swatting.

Some cottagers have built elaborate stone edifices, chimney and all. Others try to contain their flames with break walls. Some use wet wood. I tried the old fire in a barrel trick like you see in all those old street corner movies. But nobody seated could see the fire. And nobody standing could sing doo-wop.

One neighbour lights a campfire faithfully each night and then goes in to watch television. A man after my own heart. Apparently, a successful campfire needs to be big. It should be visible across the lake and from the back row of chairs. Flames should shoot at least 15’ into the night sky. Folks should be boisterous and noisy. Max volume for the rock music too. Above all, it must be burning strong and going on long after midnight.

Privy to all this trial and error lore, I got into my pit. I haggled an old tractor tire rim from a junkyard. I excavated about a foot and a half deep and laid a bed of crushed limestone. I placed a layer of firebricks on top. I set the rim on the bricks and filled around the outside with limestone leftovers. I made myself a wood lid to keep out the rain when not in use. Jubilant at my accomplishment, I yelled: “Fire in the hole!” The wife said not to hold a match so close to my head.

Although technically perfect, my campfires can be the pits. One side still gets too well done. The wind always prevails smoke into my face. My wood is rotten. My marshmallows fall off into the fire or flare into burned crisps. I always manage to kick over my drink and get mosquito bites in those hard-to-itch places. I can never remember that great joke or sing on key or find my way to the outhouse in the dark.

Ghost stories keep the wife up all night, or at least until I can settle down and sleep. And guess who sat on a garter snake? I’m always the one who has to hang around long after everyone else’s gone to make sure the fire’s out. It wouldn’t be so late if the wife would remember not to lock the door when she goes to bed. Yes, I love campfires, especially on hot summer nights.