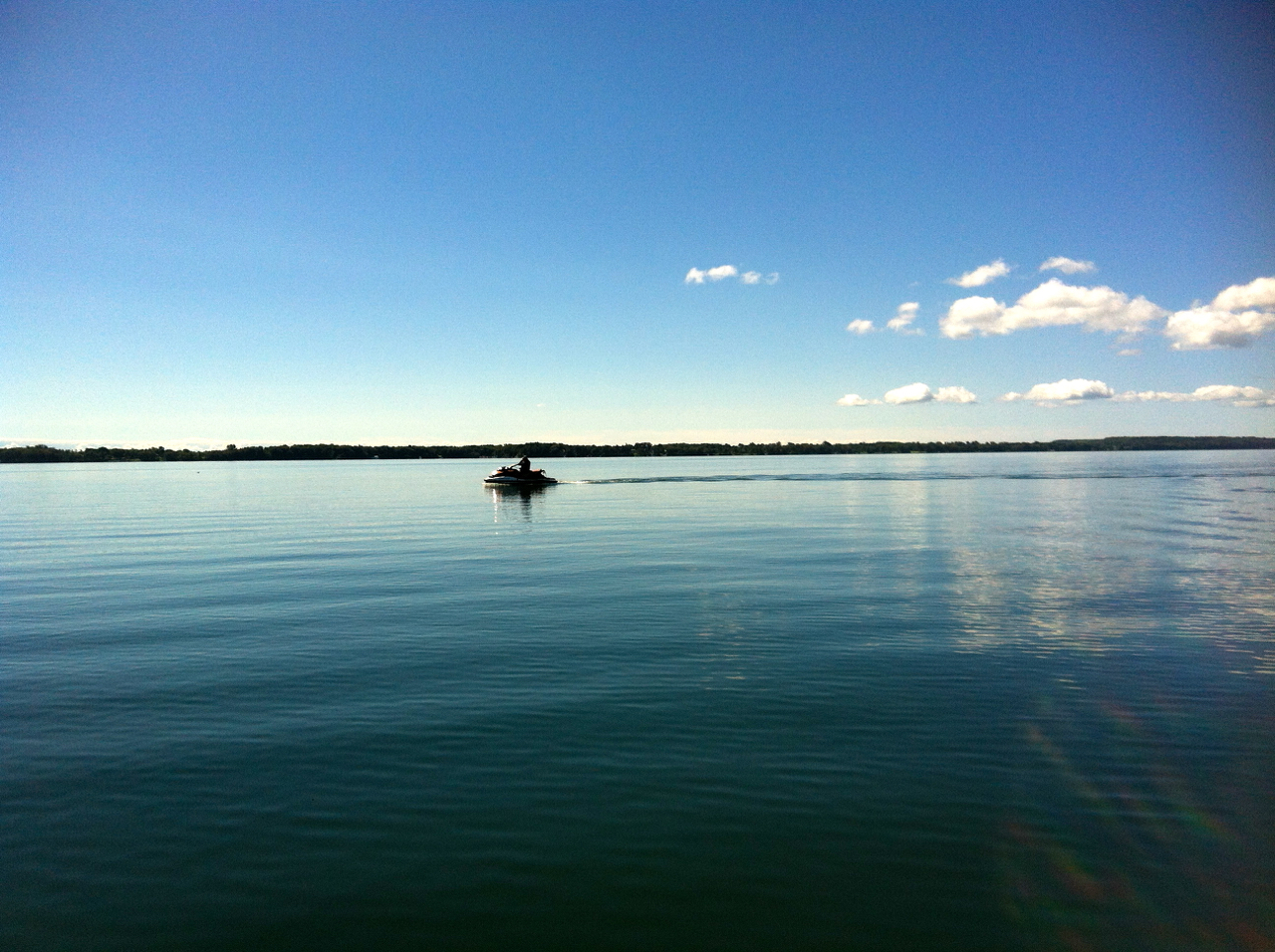 On days when winds are calm, this self guided Bay of Quinte Sea Doo Tour from Trenton to Kingston, Ontario is a scenic PWC adventure in Canada. It’s about a 226-kilometre jet ski ride on the Bay of Quinte, Adolphus Reach and the North Channel on my Sea Doo GTX 155.

The waters are largely protected from Lake Ontario by the islands that form Prince Edward County, commonly known as “The County”. There are many bays and back channels for recreational boaters to explore. But be careful because some tend to be weedy for Sea Doo riding.

Our launch point for this Sea Doo ride is Centennial Park, Trenton, at the mouth of the Trent Severn Waterway. There’s plenty of free parking and multiple ramps with several docks for launching Sea Doo, jet ski or waverunner personal watercraft. Once launched, a turn to starboard put us into the marked recreational boating channel. From there, we head east in to the Bay of Quinte. Almost immediately, we spot something in the distance about 15 klicks away. It gradually materializes as the first bridge over the waterway, crossing from Belleville to Prince Edward County. 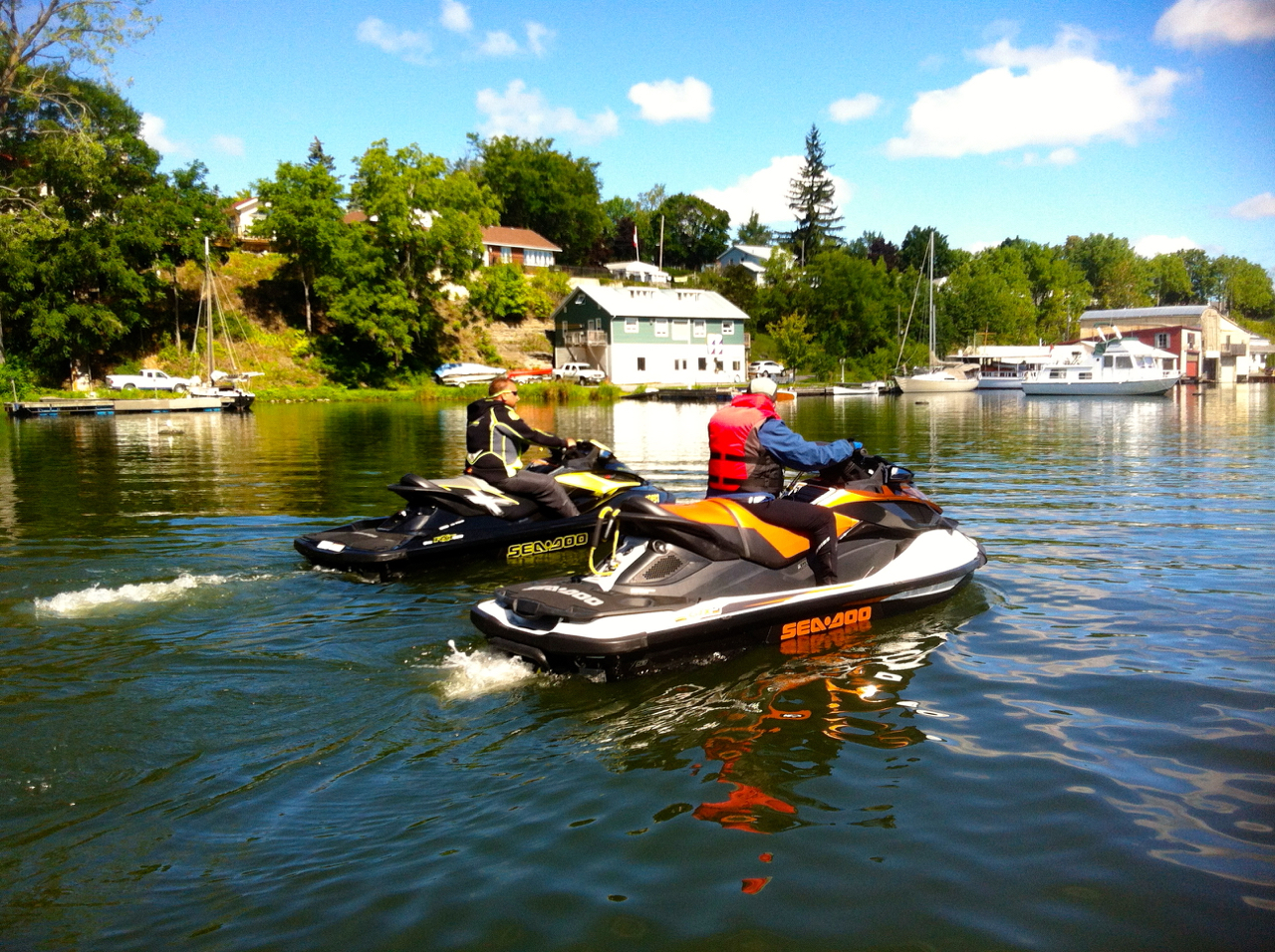 About 6 kilometres later on our Sea Doo ride, the bay widens considerably. But we proceed due east straight across it for 10 kilometres. As it begins to narrow again, we soon spot the second major bridge, 8 klicks ahead. The marker buoy approach to this bridge is closer to the south shore. After passing under the bridge, we steer straight to round the starboard side of Foresters Island. (If time or inclination allows, Sea Doo riders can run due east from Forester’s Island and pick up the marked channel into Napanee, birthplace of Avril Lavigne). From Forester’s, it’s a sharp turn to starboard to cruise about 14 kilometres south past the mouth of Hay Bay on the port side. 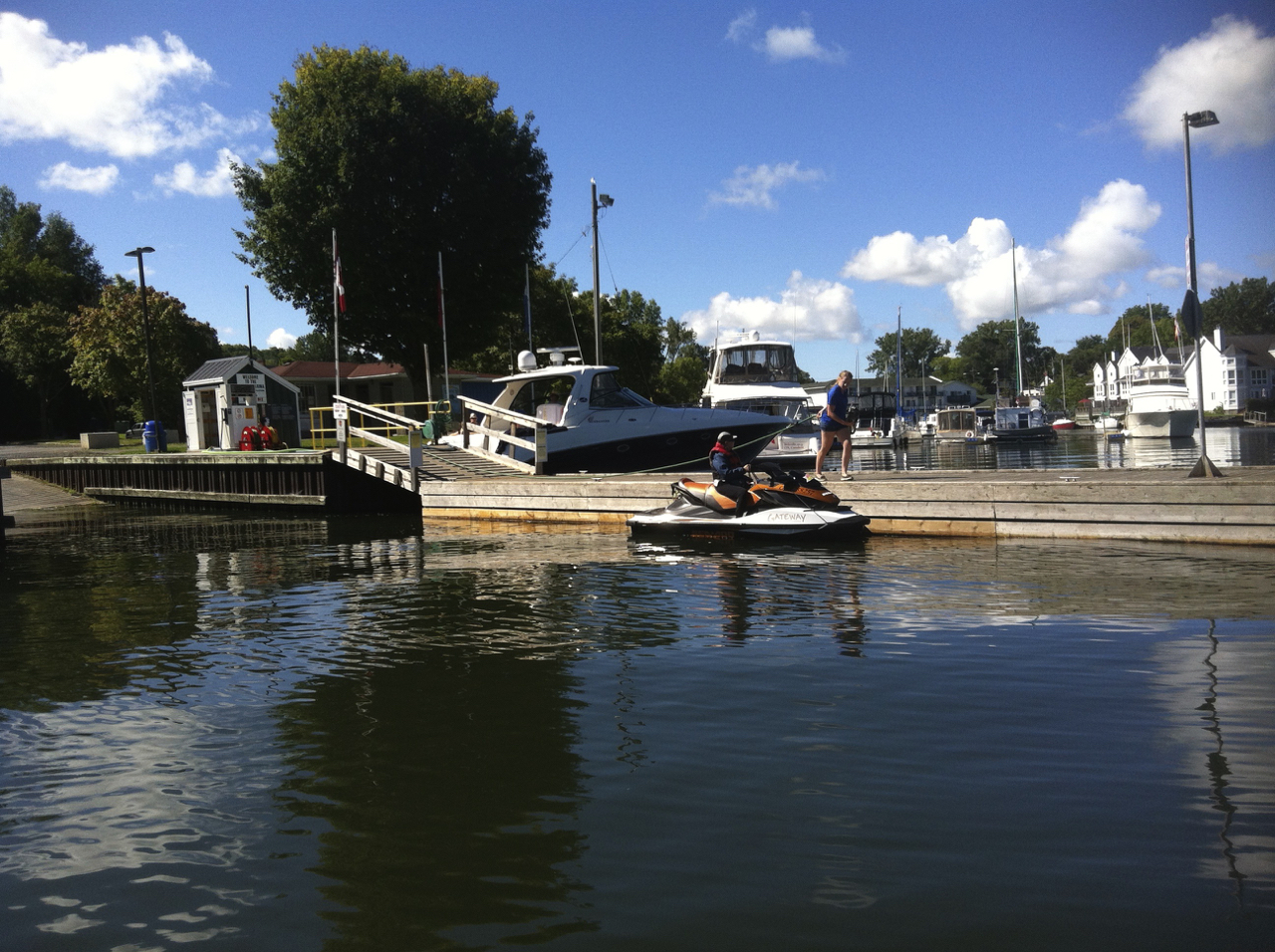 At the end of this southern leg, we veer port slightly along the western shore and head into the quaint Picton harbour to fuel up at the public marina. Thereafter, the next part of our Sea Doo ride is about 22 klicks eastbound on Adolphus Reach. We head towards the next landmark, the tall chimneys of a major industrial plant on the north shore. Exactly opposite this facility is the channel between Prince Edward and Amherst Islands. This is first of two places Sea Doo riders and recreational boaters are totally exposed to waves from Lake Ontario, albeit for less than for three kilometres. When I’m crossing this gap going east, I usually stick close to the north shore. Westbound, I hug the shore of the islands on either side of it. 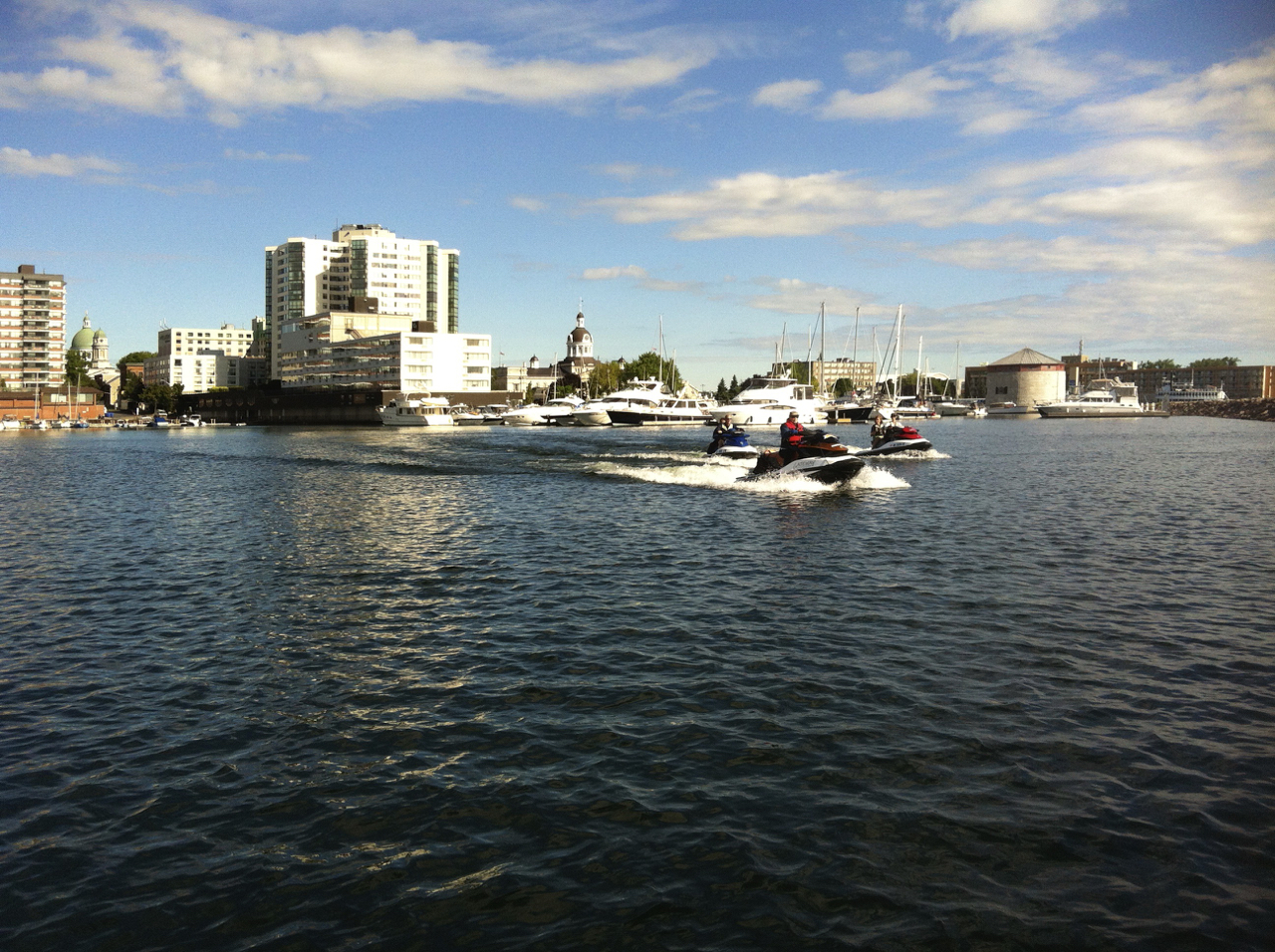 From there, it’s about 17 kilometres to the tiny Brother Islands. To avoid their rocks and shoals, we stay well to starboard, closer to the mainland for the final 14 klicks of Sea Doo riding into Kingston.

The second gap exposed to Lake Ontario is immediately east of the Brother Islands. So the last leg into Kingston can be wavy. This is not only because of being exposed to Lake Ontario for part of the way It’s also due to a geographic configuration between the mainland and Wolfe Island (the one with all the wind turbines and home to Don Cherry) that tends to funnel the wind through here. You’ll know you’re arriving at Kingston when you start seeing lots of sailboats in the bay.

At Kingston, we turn into the Portsmouth Olympic Marina for fuel and food. It’s right beside the now closed Kingston Penitentiary, whose high walls tower over the shoreline. If you want to take some time out to visit downtown Kingston, transient docking (but not fuel)  is available at Confederation Basin Marina. It’s located on the south side of the Kingston Waterfront Hotel (turn starboard before the Martello Tower). From there, you can join other recreational boaters to stroll downtown and grab lunch from a street vendor at Confederation Park (on the north side of the hotel). Note: Several times during the summer, Portsmouth Olympic Marina hosts Cork sailing races and can be crowded. Alternate marinas with fuel for Sea Doo riders are Rideau Marina. It’s located not far up the entrance to the Rideau Canal north of Confederation Park and just past the first bridge. Another option is Collins Bay Marina, located west of Kingston on the east shore near the top of the bay (turn north opposite Brother Islands).

For our return Sea Doo ride, we hug the shore of Amherst Island and then Prince Edward Islands. We do our final fill up at Picton Municipal Marina, before backtracking our way to Trenton.

View Trenton to Kingston in a larger map