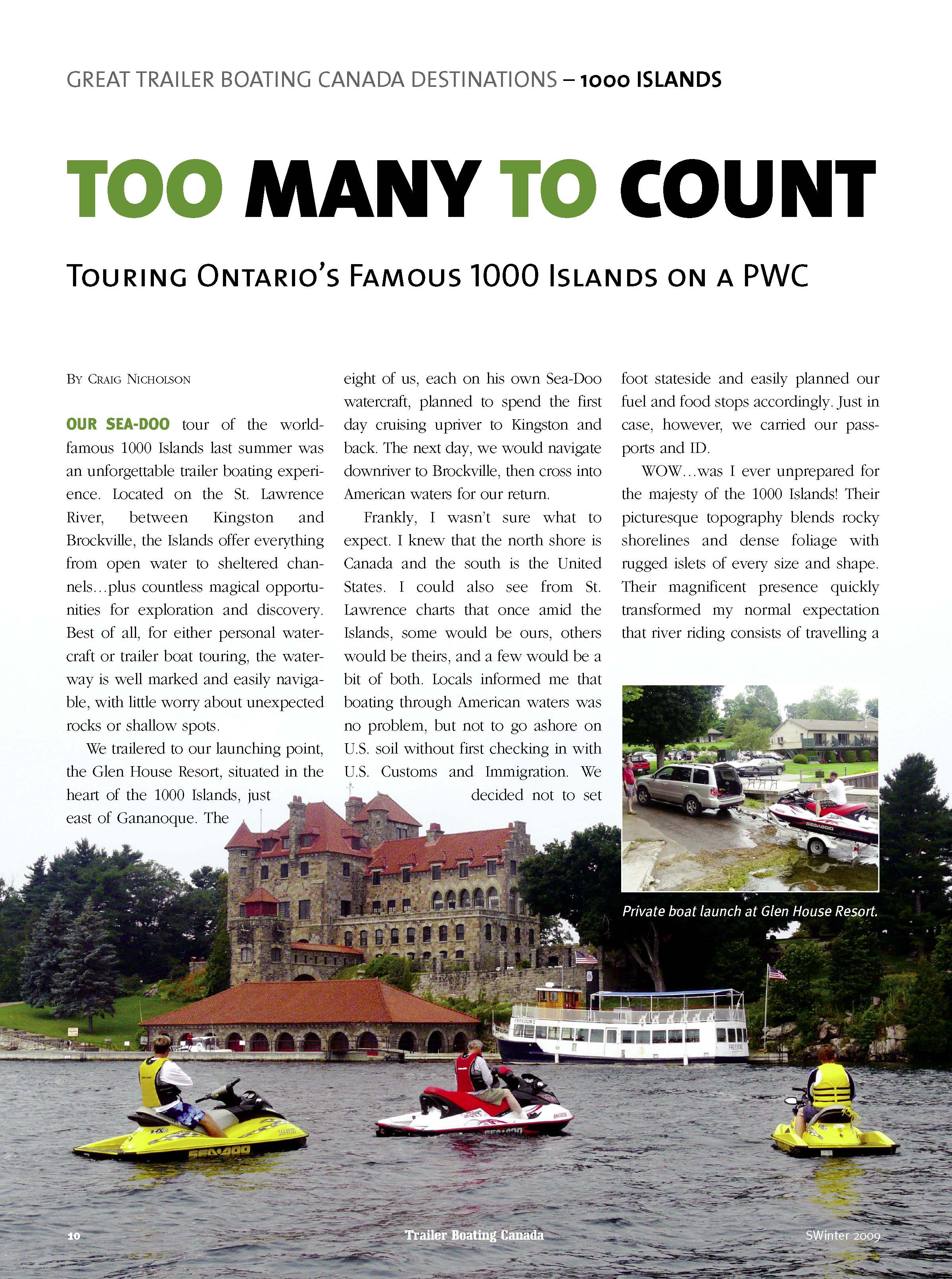 Our 1000 Islands Sea Doo Tour was an unforgettable, self guided, PWC adventure in Ontario, Canada. Located on the St. Lawrence River between Kingston and Brockville, the Islands offer everything from open water to sheltered channels. Plus countless magical, recreational boating opportunities for exploration and discovery of Ontario. Best of all, for Sea-Doo touring the waterway is well-marked and easily navigable for recreational boats. So there’s little worry about unexpected rocks or shallow spots for riders of Sea Doo, jet ski or waverunner personal watercraft.

For this jet ski ride, we trailered to our launching point, the Glen House Resort. It’s situated in the heart of the 1000 Islands, just east of Gananoque (see How To Launch Safely). The eight of us, each on his own Sea-Doo watercraft, planned to spend the first day cruising upriver to Kingston and back. The next day, we would navigate downriver to Brockville, then cross into American waters for our 1000 Islands jet ski return ride.

Frankly, I wasn’t sure what to expect. I knew that the north shore is Canada and the south is the United States. I could also see from St. Lawrence charts that once amid the Islands, some would be ours, others would be theirs, and a few would be a bit of both. Locals informed me that boating through American waters was no problem. But have your passport handy and don’t go ashore on U.S. soil without first checking in with U.S. Customs and Immigration. We decided not to set foot stateside and easily planned our fuel and food stops accordingly (see Tour itinerary below).

WOW…was I ever unprepared for the majesty of this 1000 Islands Sea Doo ride! Their picturesque topography blends rocky shorelines and dense foliage with rugged islets of every size and shape. Their magnificent presence quickly transformed my normal expectation that river riding consists of travelling a linear strip of unbroken water contained by two shores. Instead, we Sea Doo riders experienced a jigsaw puzzle of cruising choices. These included big water, small water, scenic channels, large bays, small coves, backwaters, hidden inlets, oodles of shoreline. And of course, too many islands to count! 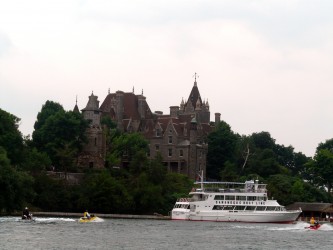 And how about those cottages. Or should I say mansions? The 1000 Islands is a recreational boating playground for many well-off families whose palatial residences equal those of Muskoka. There’s century old to ultra-contemporary and everything in between. This eye candy architecture considerably enhances the area’s overall wow factor for Sea Doo riding.

I knew from our charts that the main channels and small craft routes are officially marked. Once I familiarized myself with key marker numbers, navigation was straightforward, with red to the right heading to Kingston. Generally, the markers parallel the mainland. So whichever set you follow (assuming that it isn’t a marina channel) will eventually merge with a main channel.

Note that there are parallel Canadian and American channels for much of the waterway between Kingston and Brockville. Clusters of islands separate them most of the time. And the border line all of the time. Jet ski riders are okay to take either channel as long as they don’t come ashore on U.S. soil without checking in. Consequently, what we initially perceived as mainland often turned out to be another island. However, knowing that Canada was always north, we had little trouble working our way back to our side and Glen House Resort on each day of Sea Doo riding. 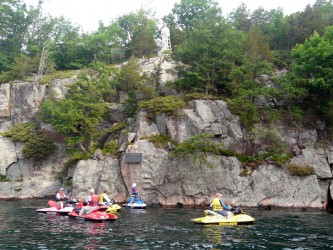 The charts also indicated numerous rocks and shoals. Some were similar to those found in Georgian Bay’s inner channel. But from the seats of our Sea-Doo watercraft, all were either clearly visible or their markers were. That’s one of the benefits of jet ski riding on a waterway frequented by lots of residents and cottagers with many big, expensive cruisers and runabouts. Everything’s well marked for or by them!

On this jet ski ride, I bet there are as many cruise boats as there are islands! Based in virtually every centre along the river, they come in all sizes and configurations. These ubiquitous and slow moving boats hardly make any wake. When we had a doubt, following one (or watching from whence it came) helped put us back on our Sea Doo ride route. We didn’t worry much about getting lost anyway. Because even during those August weekdays, pleasure craft were abundant and many people were at their cottages.

Wind was relatively calm for our two days of jet ski riding. Surface conditions ranged from mild chop in the open to dead calm in protected areas. We did encounter prevailing turbulence caused by powerful undercurrents as the river narrows at the Ivy Lea – Thousand Islands International Bridge to the U.S. near Rockport. A similar phenomenon also happened in the wake of several huge freighters using the Seaway channel. But neither of these occurrences affected our very stable Sea-Doo watercraft. That said, I wouldn’t recommend venturing out on a personal watercraft ride, especially in open areas, if winds are strong.

Where We Stayed for 1000 Islands Sea Doo Tour… 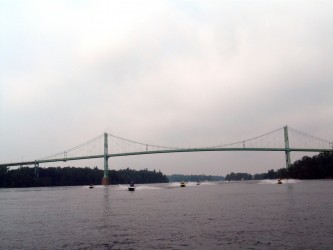 We picked Glen House Resort for our Sea Doo ride because of its location, amenities and ample parking. It also offers the Smuggler’s Glen Golf Course. Easily accessible from the Thousand Islands Parkway off the 401, Glen House is also situated at waterside in a sheltered bay. The resort has its own recreational boat launch and docks for guests. The main Canadian channel crosses directly in front of that bay at marker H18. So we set course from there for Kingston to the starboard and Brockville to port.

Besides those already mentioned, highlights of our Sea Doo ride included the Martello towers and Old Fort Henry at Kingston Harbour. And the imposing statue of St. Lawrence overlooking Raft Narrows on the Canadian shore just east of the Ivy Lea – Thousand Islands International Bridge. Plus the Singer and Boldt Castles located on islands in the U.S. channel on the way back from Brockville.

I was so impressed with the 1000 Islands, that I made a return Sea-Doo ride several weeks later with my wife. She really loved that jet ski ride too. And we both agree that it will become a regular Sea Doo riding destination for us in summers to come. So whether by jet ski or a runabout, exploring doesn’t get any better than spending a few summer days discovering the 1000 Islands on a PWC adventure.

Glen House Resort to Kingston return (4 to 6 hours, depending on speed, fuel and lunch stops)

Glen House Resort to Brockville return (4 to 6 hours, depending on speed, fuel and lunch stops)