This Georgian Bay North Sea Doo Tour goes from Parry Sound north to Pointe au Baril. Georgian Bay has always had a special mystique with its rugged, Group of Seven scenery. It’s also a Sea-Doo rider’s and recreational boater’s paradise. That’s why we towed our Triton trailers to Parry Sound. From there, we cruised north among its 30,000 rugged islands. Then, along windswept shores and rock-cut channels towards Pointe au Baril Station on our self guided Sea Doo ride. Parking our trucks and trailers at Glenn Burney Marina, we launched our four Sea-Doo personal watercraft for a day of jet ski adventures on those sparkling waters.

Before starting your Sea Doo tour on Sea Doo, jet ski or waverunner personal watercraft in Ontario and throughout Canada, it’s always a good idea to do a little orienteering. Using marine charts (even a good area map will do), we noted both our launch location and destination. We quickly discovered where Pointe au Baril is located north of Parry Sound. Literally, it means “Barrel Point”, after the fire container that originally signaled shelter for mariners in the early 1800’s.

We rode with mainland to starboard and Georgian Bay to port for our entire outbound journey. So, all we had to do was follow the plentiful navigation markers for recreational boaters (see “Our Route” at the end of this article). That’s not to say there aren’t a thousand or more islets, shoals, passages and inlets to confuse the issue. But we were okay remembering that Pointe au Baril is north and Parry Sound is south. And that Parry Island (First Nation Reserve) is a huge piece of real estate that sits between the Town of Parry Sound and the full force of Georgian Bay. 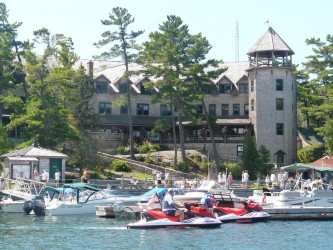 Our ultimate destination for this Sea Doo ride wasn’t exactly Pointe au Baril. No, we were searching for the famous Ojibway Club. Built as a grand resort hotel in 1906, it’s a rustic, rambling edifice. With gabled roofs, imposing tower, sweeping stone steps and broad veranda, it magnificently harkens back to the glory of a by-gone era.

Rescued from likely ruin by local cottagers in the sixties, the Ojibway Club now operates a ten-week season each summer (end of June 30 – end of August). It’s become a social and recreational centre for Port au Baril’s island archipelago community of cottagers. With recreational boat docking, fuel and food available, the Ojibway Club is a must-visit destination for Sea-Doo riders. But I’m getting ahead of myself…

Turning starboard out of Glenn Burney Marina, we cruised under the swing bridge that connects Rose Point to Parry Island. It also acts as the southern gateway to the Parry Sound harbour. We spent a few moments exploring the town’s waterfront. After that we headed through the channel that opens up into the larger bay called Parry Sound. A Canadian Coast Guard detachment is located on the starboard side.

Heading west, we stayed closer to Parry Island on our port side. This way, we avoided inadvertently getting off course amid the myriad islands and small bays that dot the area to starboard. Where Parry Sound narrows, we kept Killbear Provincial Park to starboard and Parry Island to port. Straight ahead, almost due west, was wide-open Georgian Bay, all the way to Tobermory. We didn’t go there! 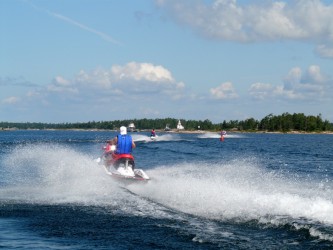 I should comment at this point that this is not a journey for a windy day. That’s because blowing air churns big waves. Although much of this trip sticks to protected inner channels and waterways, two locations (this is one) are exposed to the big waters of Georgian Bay. These can be rough if it’s windy.

All of these waterways are also host to many large cruisers, most of which can throw out an intimidating wake as they pass. Mind you, with the inherent stability of a Sea-Doo watercraft, any waves can be a blast, Especially when you’re fit, experienced and wearing a PFD. But the big ones are no family ride!

Even the inland waters of Georgian Bay made me feel small on my 3-seater Sea-Doo. Everything here – water, shorelines, and landmass – seemed larger than life. The scenery was spectacular. And on this sunny day, the waters were relatively calm, twinkling with highlights. It was as if some fairy princess had scattered handfuls of glitter to becalm the surface for our jet ski ride. 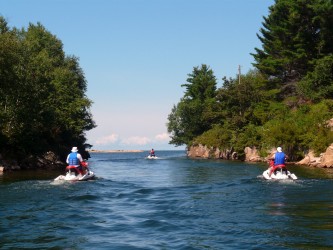 Once through the Parry Sound narrows, we avoided most waves on our Sea Doo ride by bearing to starboard and following the markers closer to shore. They took us behind several islands and into the Shebeshekong Channel. After a hard turn to port at its end, we soon emerged into the second, exposed-to-Georgian Bay section at the mouth of Shawanaga Inlet. But once into this Inlet, it was a straight run to the Middle Channel that leads to the Ojibway Club.

It sneaks up on you. The Ojibway Club is tucked into the north side of a larger and same-named island. Also, it’s shielded from sight of the Middle Channel by a smaller islet. So one minute it’s not visible. But the next, the Ojibway Club is suddenly revealed in all its astonishing glory, like an enchanted castle plunked into the middle of nowhere. What a hive of activity, with dozens of boats coming and going, and at least a hundred folks bustling about!

After a leisurely lunch at the snack bar and a stroll around the Ojibway’s grounds and dockside shops, we retraced our course home. It was still mid-afternoon when we approached the Parry Sound narrows. But we figured it was too early to head back the way we had come. So we decided to circumnavigate Parry Island counter clockwise to extend our jet ski ride… 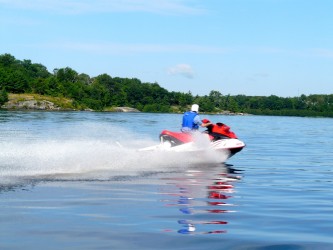 Remember, I noted earlier that Parry Island shields the Town of Parry Sound from Georgian Bay. This means we could get back to town either directly from the north (the reverse course of our outbound journey). Or by going the long way, south around the island and approaching Parry Sound via the South Channel.

So we turned to starboard before the Parry Sound narrows at Rose Island (refer to Our Route for the marker number). Then, we headed into the Waubuno Channel on the Georgian Bay side of Parry Island. This channel was less sheltered than the previous ones. But on this calm day, our Sea Doo ride around Parry Island was smooth sailing.

By following the Parry Island shore and continually angling to port, we soon picked up the markers leading from Georgian Bay to the South Channel. From there, we were in protected waters as we followed the markers all the way back to Glenn Burney Marina.

What a great day of jet ski riding! Even on this weekday, many other recreational boaters and numerous shoreline cottages would have provided us with information or assistance if it had been needed. Consequently, we boated without a care and thoroughly enjoyed our PWC adventure. As we cruised along at about 40 mph, I kept thinking about those voyageurs of old, paddling their guts out to traverse these same big waters. Believe me, Georgian Bay is a whole lot easier on a jet ski!