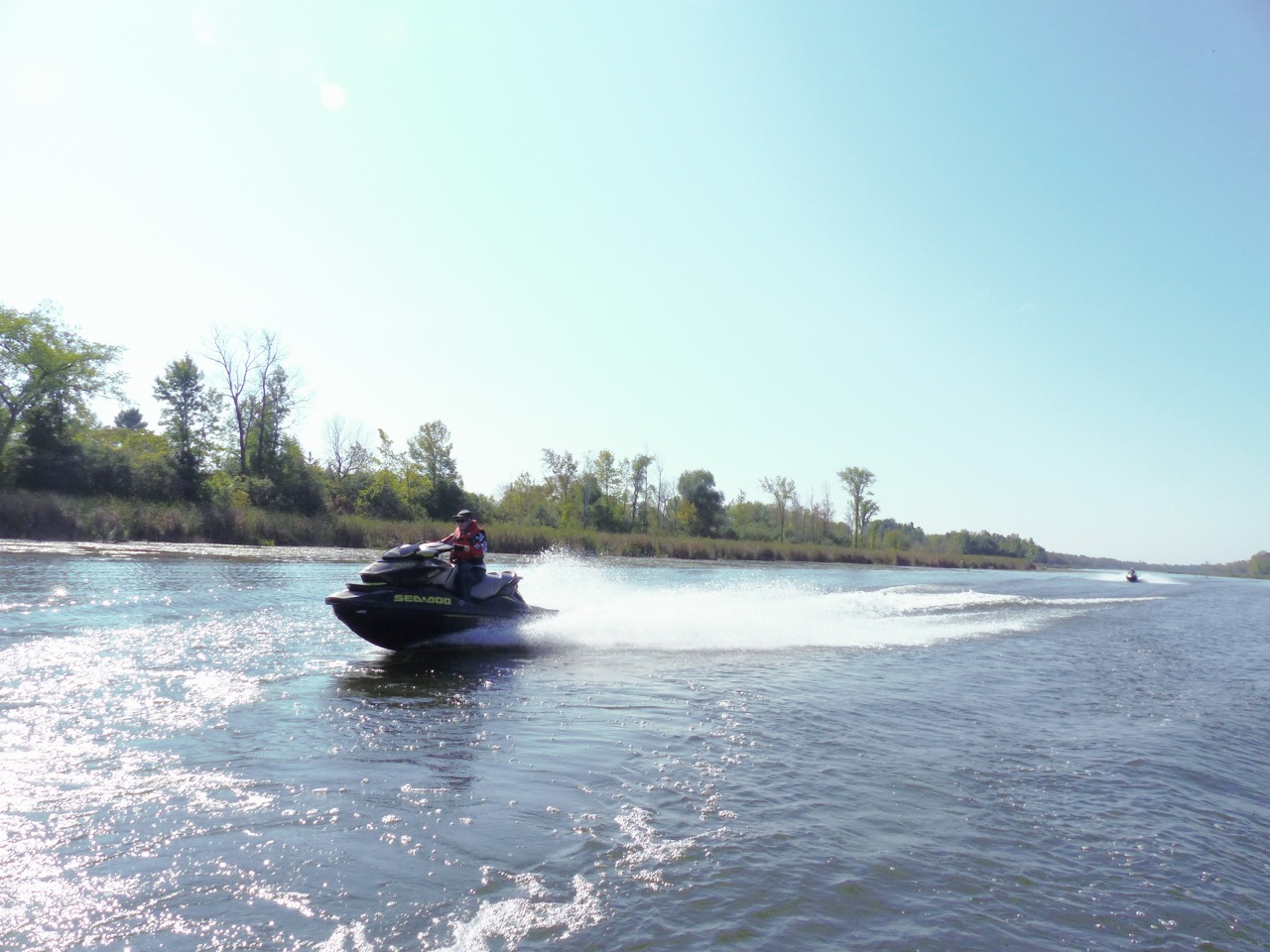 For personal watercraft riders from the Greater Toronto Area, this Port Perry Bobcaygeon Sea Doo Tour in Central Ontario is a handy self-guided day ride. It delivers a good mix of lake and river riding on Lake Scugog, the Scugog River and Sturgeon Lake. All are part of the Trent Severn Waterway, a great place for PWC adventures! 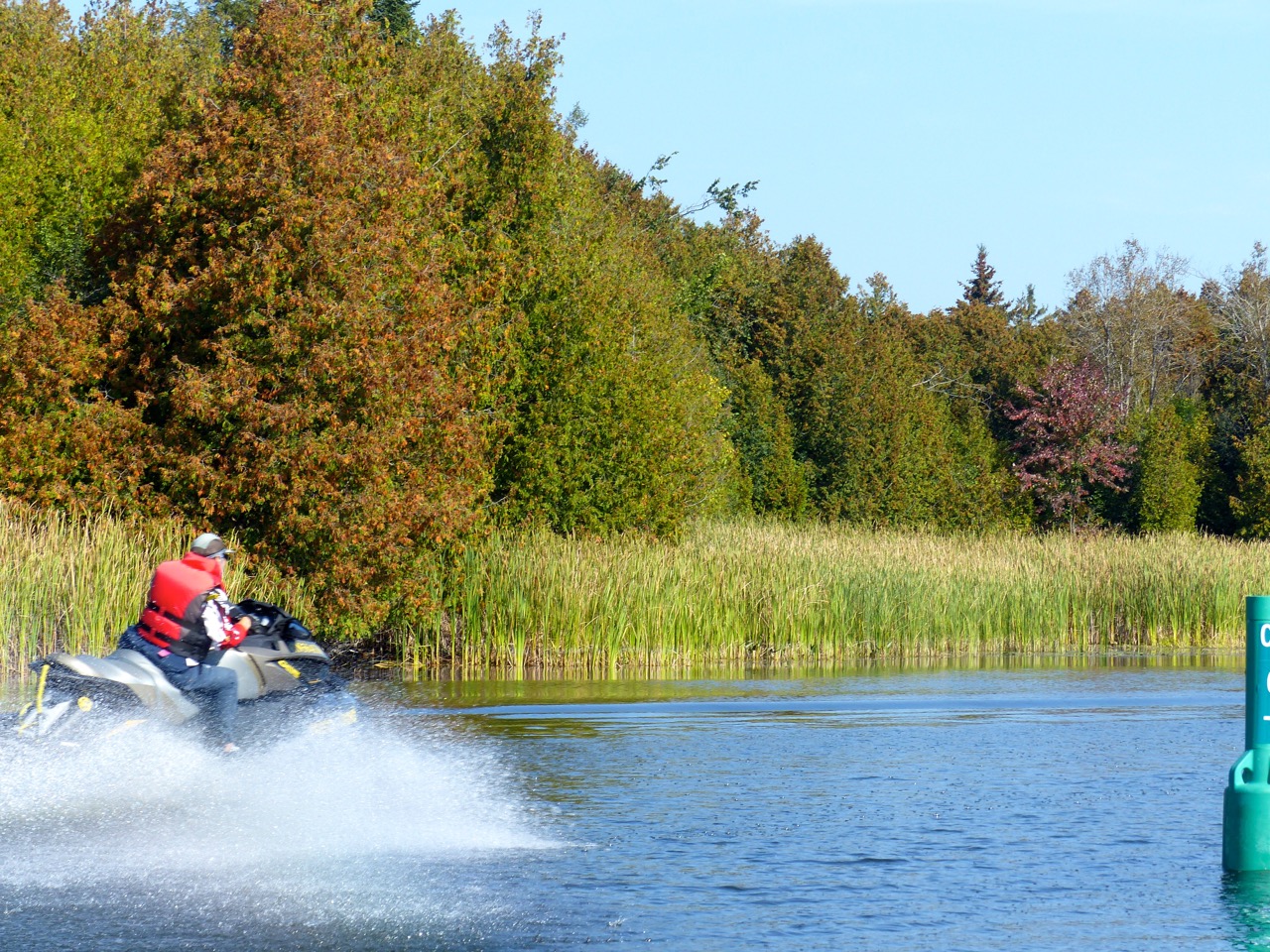 This jet ski tour also offers several decent options to extend your riding day. If you want it shorter, just follow the well-marked main navigation route directly to Bobcaygeon. This is about 70 kilometres or so, one way. To add more distance, ride north on Sturgeon Lake first to check out Fenelon Falls. Or ride east from Bobcaygeon to explore Pigeon Lake. Or both. 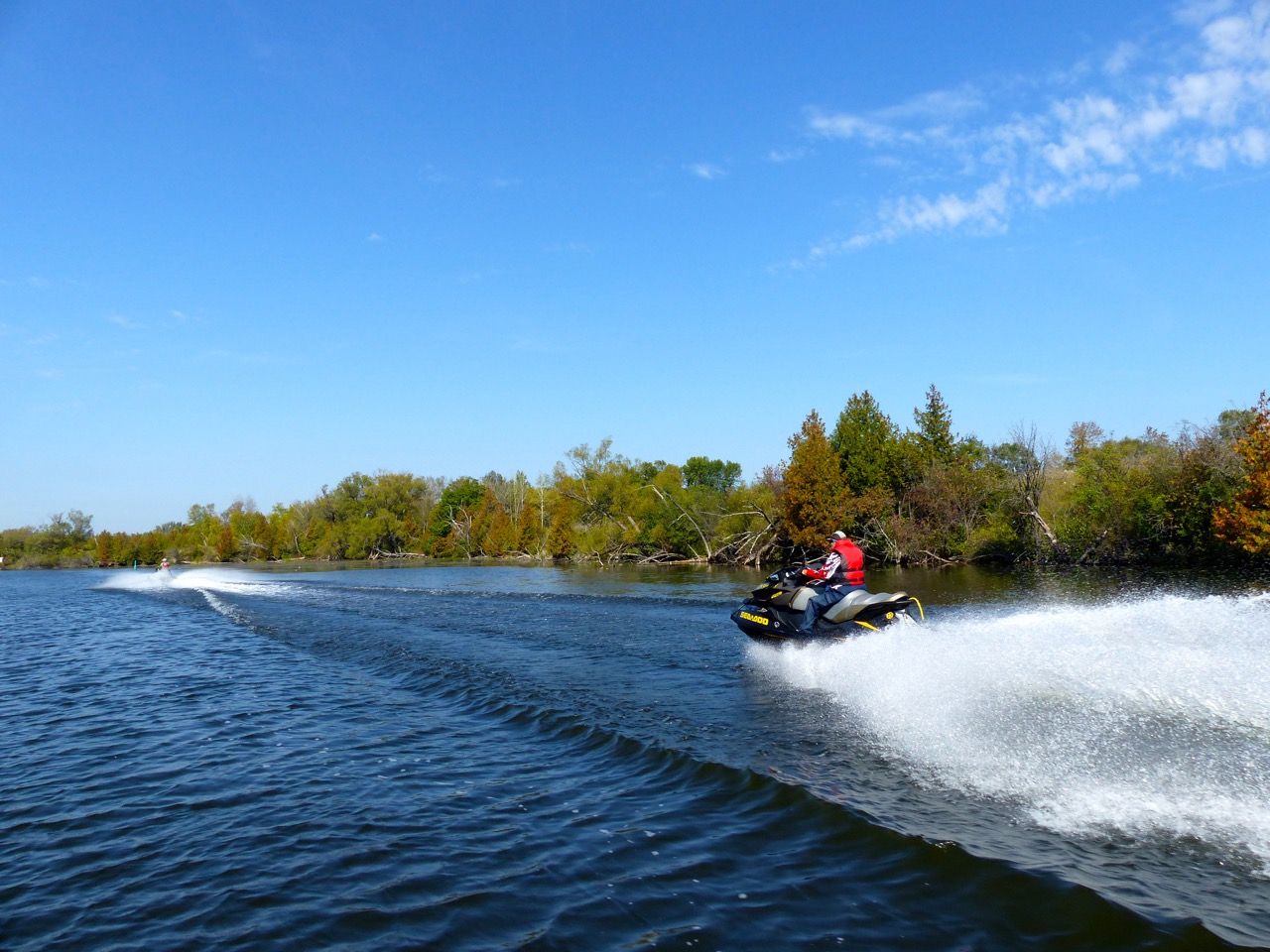 Frankly, I’ll admit that I’d been avoiding Lake Scugog. Even though it’s a popular cottaging and fishing lake. From somewhere, I had the impression that this waterway was too weedy for personal watercraft riding. Maybe because it’s an artificially flooded lake whose name in Ojibwe means “marshy waters”. This also makes Lake Scugog pretty shallow. One consequence is that waves can be rough when it’s windy, so pick your day carefully for this ride.

But I was pleasantly surprised by Lake Scugog. Like most of the eutrophic Kawartha Lakes, there are peak growth times for weeds. There are also perennially weedy areas. Smart PWC riders can avoid both by sticking to the main boating channels and going later in the season.

We went on a beautiful September day. Almost autumn, so weeds weren’t a factor. Also, our ride took us in a giant “S” course up the middle of Lake Scugog around Scugog Island. As a result, we avoided the shores and back bays that can be weedier. It being a September weekend, the waterway wasn’t summer-busy either. 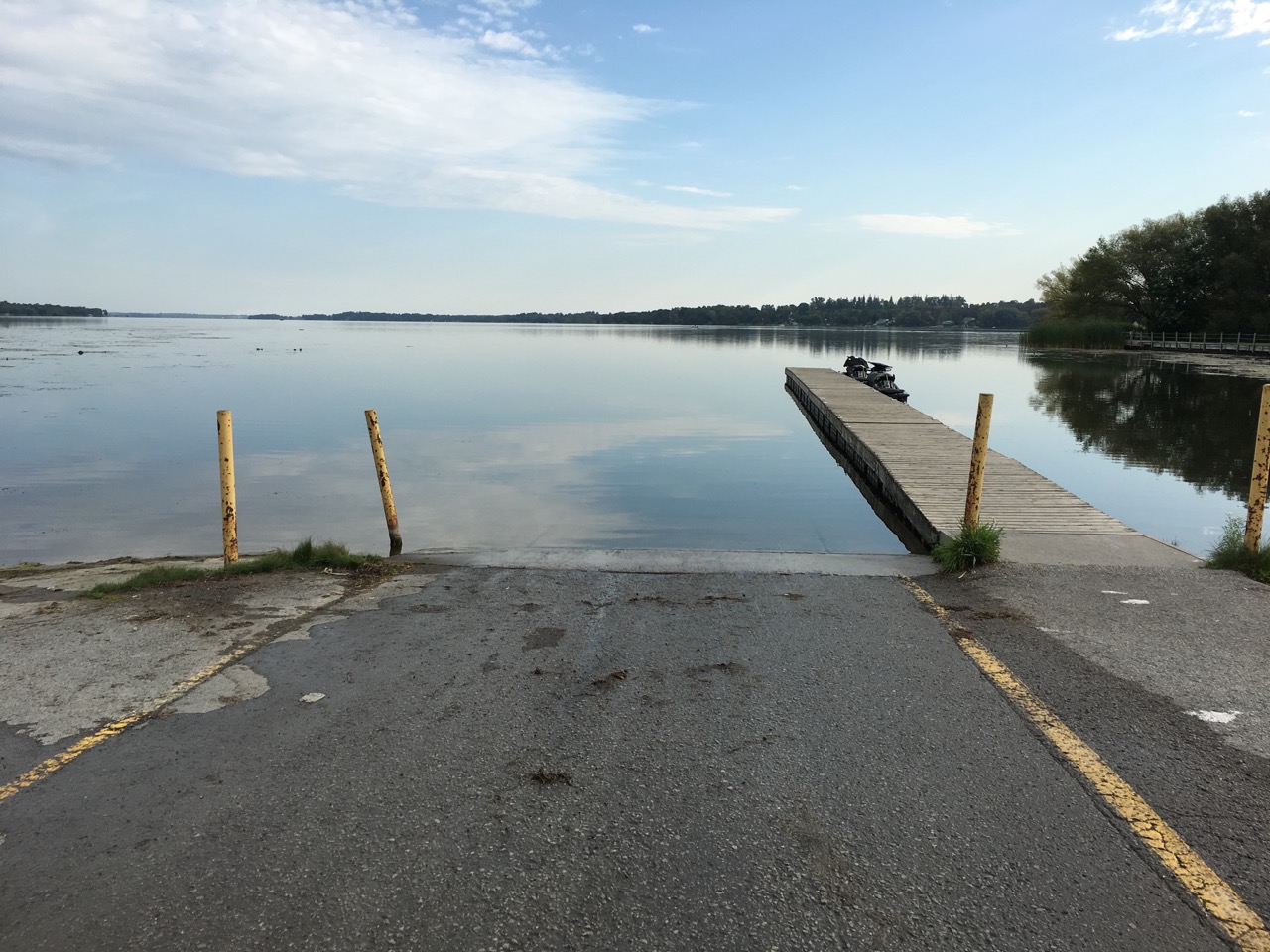 After trailering less than 80 kilometres northeast from Toronto, we staged from the free public boat launch in Port Perry. Then we rode to Bobcaygeon for lunch and back. I was impressed with the Port Perry launch. It provides wide concrete ramps and a long dock for transient mooring.

It also offers plenty of paved access space to get turned around and back into the ramp. Plus, there’s a good size public parking lot nearby with a convenient pay kiosk. And it’s only a couple of blocks from the local Dairy Queen, our choice for post ride go-to refreshment. 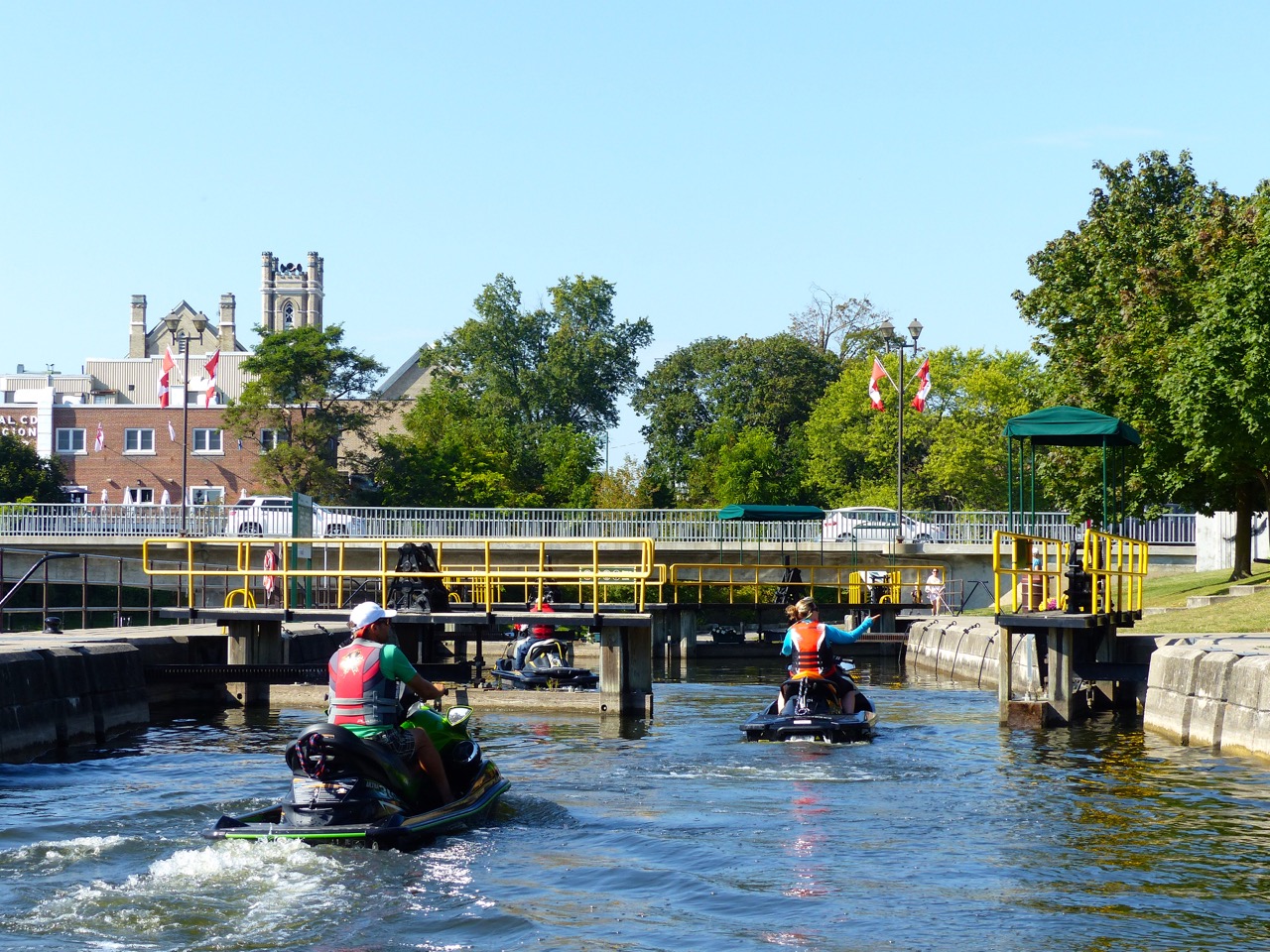 From the northeast end of Lake Scugog, we entered the Scugog River. Its 14-kilometre length connects Lake Scugog with Sturgeon Lake to the north. Along the way, this river bisects the Town of Lindsay. Here, it also passes through Trent Severn Waterway Lock 33.

The river’s main channel is marked with buoys. So once again weeds aren’t a concern. Also, even though the section through Lindsay proper is a speed zone, there’s lots to see so time passes quickly. 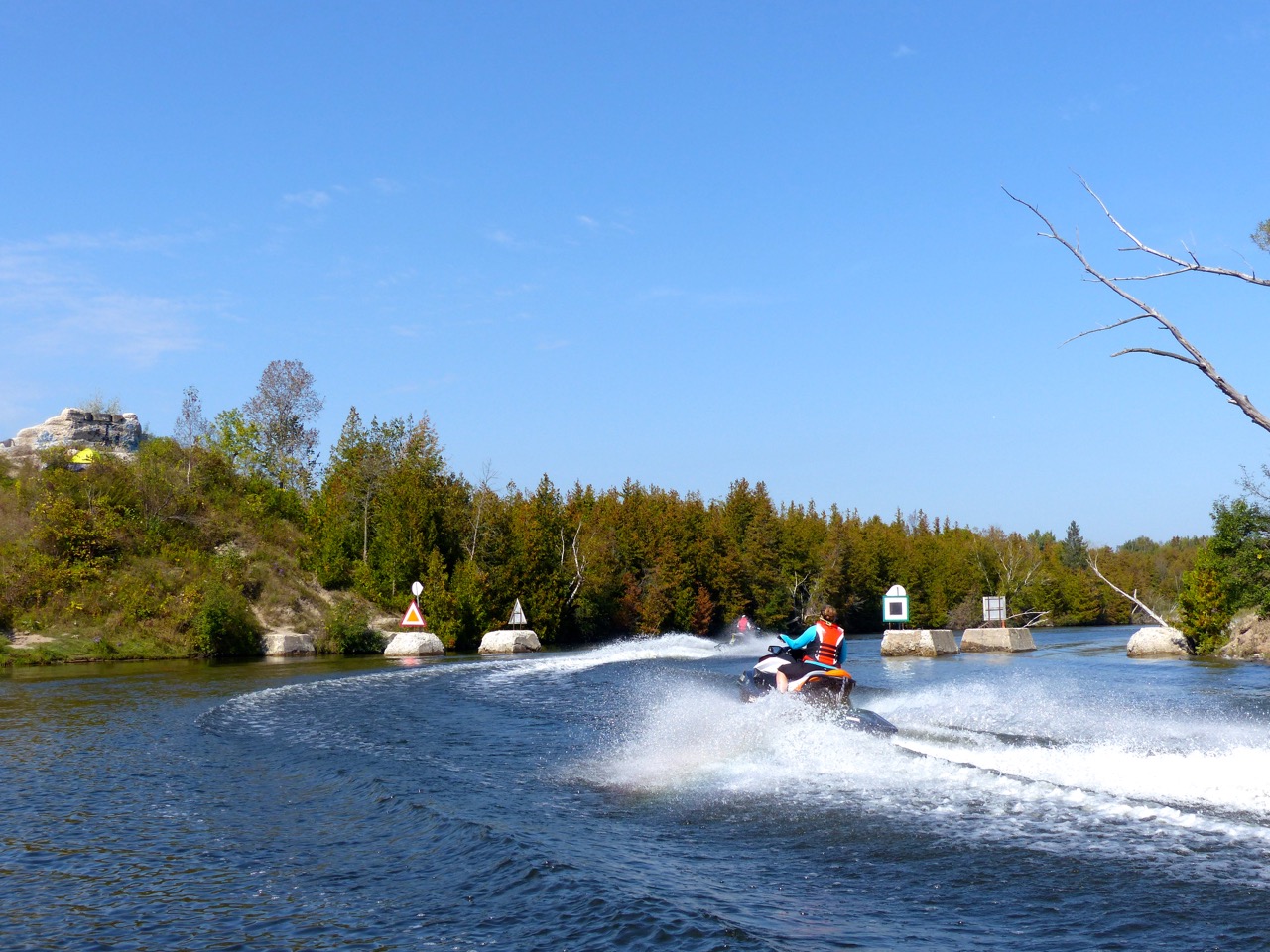 Besides, you can boot it again when the Scugog River meets Sturgeon Lake. Ride straight ahead to reach Fenelon Falls. Bear to starboard at Sturgeon Point for Bobcaygeon. Here, there are two shore side restaurants on the other side of Lock 32. We prefer the Bobcaygeon Inn, tucked into a dead end channel on the port side, past the marina. Not only is the food scrumptious, its docks are better protected from boat wake.

If you have the time and inclination, Bobcaygeon is a great place for a stroll to see local sights. Alternatively, since you’re already through the lock, Pigeon Lake isn’t far if you have time for more exploring.

Overall, I recommend this Port Perry Bobcaygeon Sea Doo Tour. It provides an interesting variety of riding close to home for many Central Ontario PWC riders. The route is well serviced with towns and marinas. And there are plenty of other vessels and cottages in the unlikely event you need assistance. What’s more, don’t forget that Dairy Queen in Port Perry! 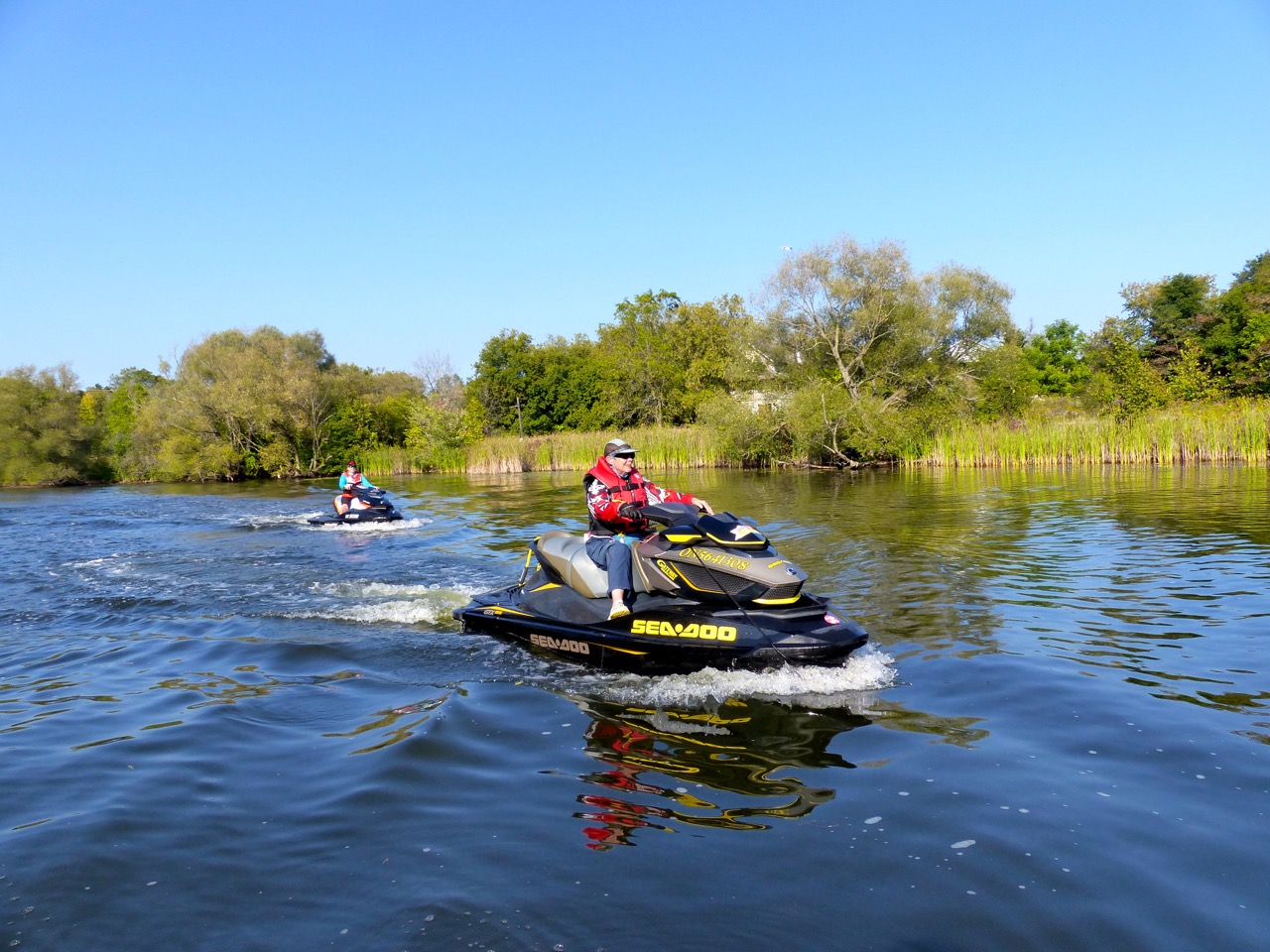