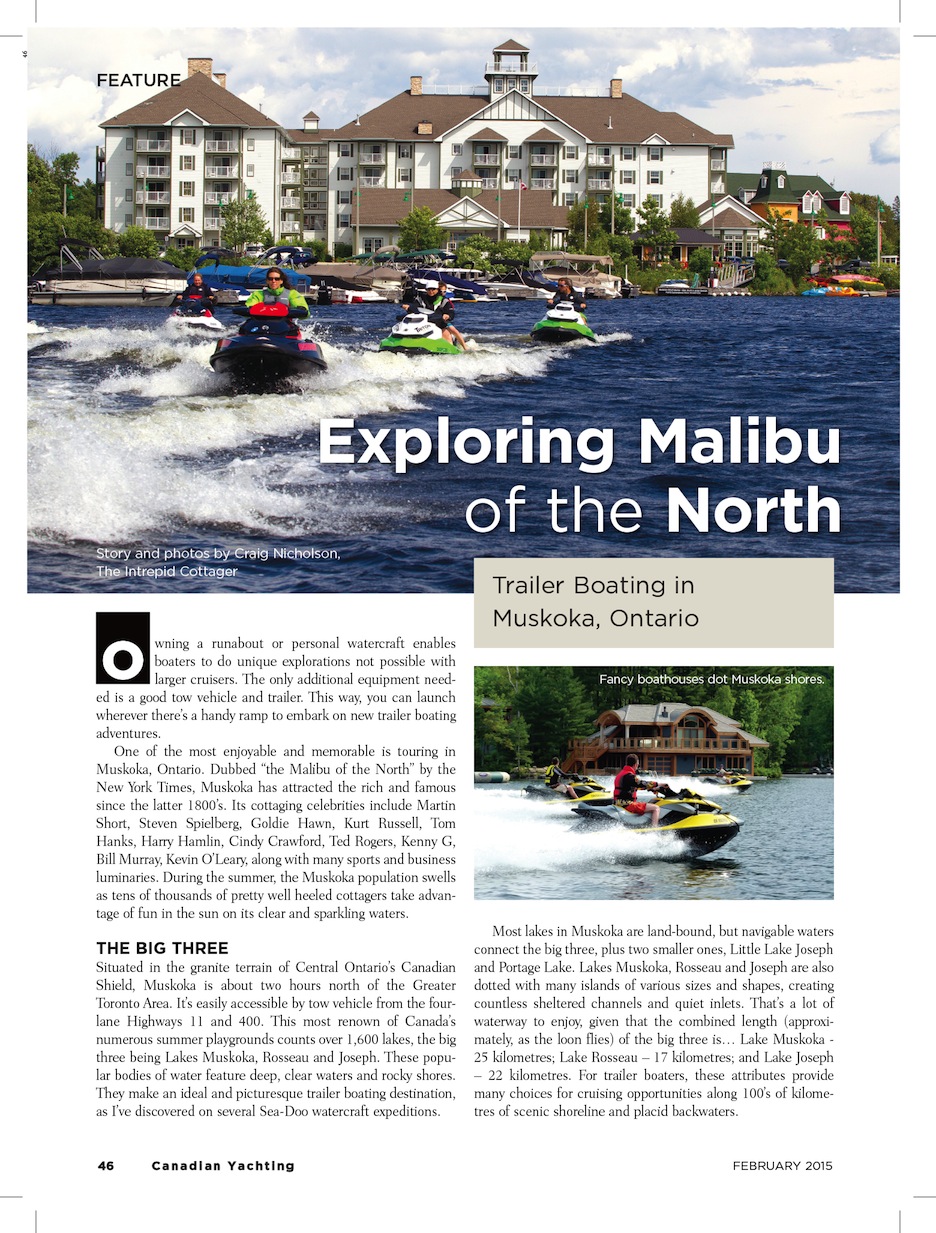 It was a pristine summer day for a Muskoka Sea Doo Tour of self guided jet ski adventures in Ontario. The kind where the sky shimmers blue and cloudless all the way to heaven. One second, I was idling through a ‘no wake’ zone, sitting high, dry and proud on my Sea-Doo watercraft behind a procession of large boats. The next I was in a wild audition for ‘Waterworld’, submerged like that proverbial submarine with a screen door. My Sea-Doo GTX Limited iS 260 shot back to the surface shedding water amid gales of laughter from my companions and other boaters. I did my best to appear in total control. A real stretch with all my choking, sputtering and drowned-rat impersonating.

I’d attempted a lazy cut across ten or fifteen feet behind a huge inboard outboard. But I’d been oblivious to the suck of its deep wake at slow throttle. My last dry perception was a glimpse of my Sea-Doo’s bow hanging over the edge of a wake as deep as Niagara Falls. Then gravity slammed me straight down into the trough for an urgent appointment with Davy Jones. I remember an infinitesimal underwater hesitation, then goosing my throttle to break the surface like a trained seal jumping for the ring. I may even have swallowed a fish or two. Arf, arf.

Getting to Your Muskoka Sea Doo Tour…

Ontario has many fabulous navigable waterways for Sea-Doo riding and recreational boating. But one of my absolute favourites is cruising the Muskoka Lakes. It’s a full day trip, Plus, trailering my two-bed Triton trailer up from Toronto and back adds a total of about three hours. This driving time is on Highways 400 and 11, but that’s time well spent indeed. Alternatively, you could stay at one of Muskoka’s lakeside resorts. Then go cruising and exploring for several days at your leisure, on your Sea Doo, jet ski or waverunner personal watercraft.

Muskoka may be Ontario’s most famous summer playground. Its name is synonymous with “cottage country.” Located less than two hours north of the Greater Toronto Area (GTA), Muskoka encompasses 1,600 lakes nestled into 2,500 square miles of territory. It’s anchored by several key towns located near Highway 11 — Bracebridge, Gravenhust and Huntsville. Plus several other communities such as Port Carling and Bala. During the summer, the Muskoka population swells as tens of thousands of pretty well-heeled cottagers and recreational boaters. They take full advantage of fun in the sun on its clear and sparkling waters. All of which makes for super Sea Doo riding! 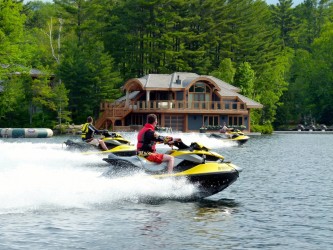 My first impression of Muskoka was that it must have more square footage of boathouse than most lakes have of cottage. And ‘house’ is the descriptive part of the word here. No mere marine garages, these. I’m talking double storey, two to eight slip structures built right on the water. Most often in replica of the adjacent ‘cottage’ – a misnomer if there ever was one. At least judging by the size and substance of these lakeside mansions. One especially tall boathouse would even accommodate a sailboat, mast up and all!

The three most renowned lakes in the area — Muskoka, Rosseau and Joseph —are also the largest. And best for Sea-Doo touring. They are interconnected, easily navigable and dotted with marinas. So gas is always handy. One of the best things about Sea-Doo riding on these mostly weed-free lakes is that you can easily avoid every rock (and there aren’t that many). Why? Because with cottagers owning so many expensive boats, every rock, shoal and channel is very well marked! 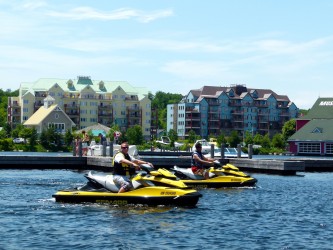 Muskoka also has many public launches. So depending on where you are coming from, it’s simple to find one that’s close and accessible (see How To Launch Safely). From the GTA, I’ve found the best launch point is near the Muskoka Wharf complex at the Gravenhurst harbour. This launch has lots of available parking with fuel at the adjacent marina. Plus, nearby dockside restaurants (including Boston Pizza), and even a Residence Inn by Marriott on site if you choose to stay over.

Typically, I cruise out of Muskoka Bay into Lake Muskoka proper. Once there, I turn to port. Then I follow the inner channel of the west shore before going around Walker’s Point, through Bala Bay, around Mortimer’s Point. Then it’s up the Indian River to the lock at Port Carling (see How To Go Through Locks). Here, Turtle Jack’s Restaurant is a neat spot to eat, with a dock of its own. 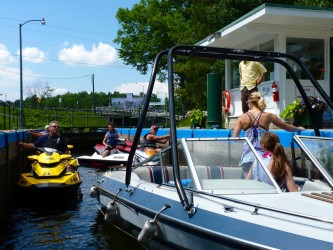 Port Carling has two side-by-side locks. On my first time there, we followed cruisers and runabouts toward the lock entrance. Never having negotiated this lock before, I was uneasy about our little craft amid their larger sisters. So we docked to assess the situation. I’ve always assessed better over an ice cream cone. So we strolled through Port Carling in our Sea-Doo gear, attracting some curious stares. From shore, we spotted a second set of locks that seemed more our style. It turned out they are exclusively for smaller craft like ours. It’s easier for PWC’s to take this easterly one, It’s smaller and quicker (fee: $10 bucks return per PWC).

From this lock, it’s a short jaunt to the south end of Lake Rosseau. From there, I like to turn to port again to Sea Doo ride along the south shore through the Port Sandfield cut and into the southern end of Lake Joseph. Then, we cruise west to Foot’s Bay and northbound along the western Lake Joe shoreline. This runs parallel to the old Highway 69, where Gordon Bay Marina has a good burger shack.

Last time there, it started pouring rain. So we tarried over our food until it stopped. We headed west along the connecting channel under Highway 69 to explore Portage Lake. But on our way back the deluge recommenced. So we sought shelter under the highway bridge, hanging on to huge wooden support beams while traffic thundered overhead. When the storm abated, we continued Sea Doo riding north on Lake Joe.

The cottages here seem newer, bigger and further apart. Surprisingly, Lake Joseph’s northern extreme boasts many sections of undeveloped shoreline. It must be reminiscent of the original, undeveloped Muskoka that attracted the pioneer cottagers of yesteryear by train and steamship. 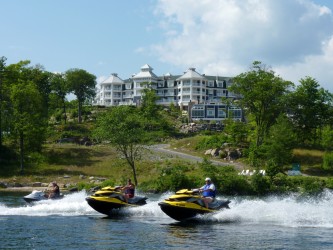 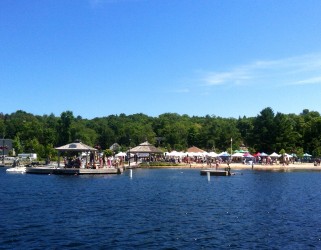 Then it’s southbound along the eastern side of Lake Joseph, past Chief’s Island for a quick visit to Little Lake Joseph before searching out the mouth of the Joseph River. Once through this narrow passage into Lake Rosseau, I head north past the J.R. Marriott Resort to the Town of Rosseau’s public wharf at the northeast tip of Lake Rosseau. Here. we often tie up our Sea-Doo watercraft and walk up the hill to the Crossroads Pub and Grill for lunch. Take note: Every Friday throughout the summer, there’s a great farmer’s market at the public wharf. Here, you can get the best peameal bacon sandwich going and stroll the stalls.

After eating, it’s east side all the way. I like to creep cautiously into several tight inlets and probe up stream where few other powerboats can go. At idle, our Sea-Doo watercraft are comparatively quiet. So much so, that we surprised three beaver doing forestry work on shore. As we observed quietly, I was reminded about another narrows. There, we’d recently stopped our Sea Doo ride to watch a mother deer and two fawns swim from one shore to the other. 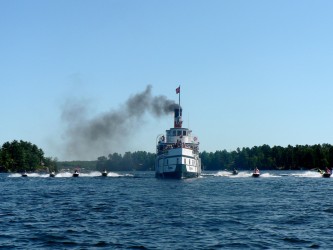 I steer my Sea-Doo GTX S 155 to explore Skeleton Bay. Then we cruise past Windermere House to check out East Postage Bay before heading back into Lake Muskoka again via the Port Carling lock. Then it’s down the east side, through “Millionaires Row” at Beaumaris, and past Boyd Bay, Stephens Bay and Taboo Resort . Soon we come upon the white lighthouse that marks the entrance back into Muskoka Bay.

If you’re timing’s right, here you may pass either the RMS Segwun or the Wenonah II cruise boats on your way back to Gravenhurst. On this leg of your Sea Doo ride, you’ll also pass the mouth of the Muskoka River, which leads to Bracebridge. But fair warning – it’s all one long slow speed zone, so unless you have time to burn, stay on the lake!

In all, my Muskoka touring has made indelible Sea-Doo memories. I’ve experienced virtually every riding condition from storm-tossed waves to surfaces of glass, from sunny skies to driving rains. Muskoka is a visual treasure trove for exploration by Sea-Doo watercraft. Remote and seemingly endless shorelines, and scenic cottages. Plus, picturesque towns and peaceful backwater lagoons make it a top-notch, Sea Doo riding playground.

If it’s a windy day, the backwater areas are well protected from any chop. So for the most part, you can avoid Sea Doo riding the wide-open parts of the lakes. Don’t worry about getting lost, either. With many marinas, resorts, boaters and cottagers around, all you have to do is ask! 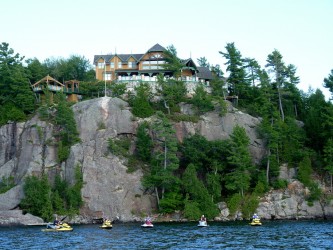 One of Muskoka’s awesome cottages

But the real bonus for Sea-Doo touring here is ogling the eye candy. And I don’t mean the human kind. The “cottages” of Muskoka are an astounding spectacle. Simply put, they are some of the most amazing structure I’ve ever seen. To say nothing of the boathouses. They take your Sea-Doo ride to a level of man-made sightseeing unsurpassed anywhere else. Even after many return trips, I frequently slow to gape at one amazing cottage after another. Each seems more spectacular than the next. Thumbs up! Thumbs down! I’ve become quite the architectural critic.

The best time to explore the Muskoka Lakes on a Sea-Doo ride is during the week, when boat traffic is lighter. On prime summer weekends, you really have to keep a sharp eye out a full 360˚ as countless boats of all sizes criss-cross the waterways. But extra vigilance is a small price to pay for Sea-Doo riding that will have you exclaiming to your friends: “Boy oh boy, you shoulda seen these Muskoka mansions…talk about outta this world!” Now add in the compelling natural beauty of Muskoka’s Canadian Shield topography and you’ve got a fine recipe for unbeatable Sea-Doo touring.