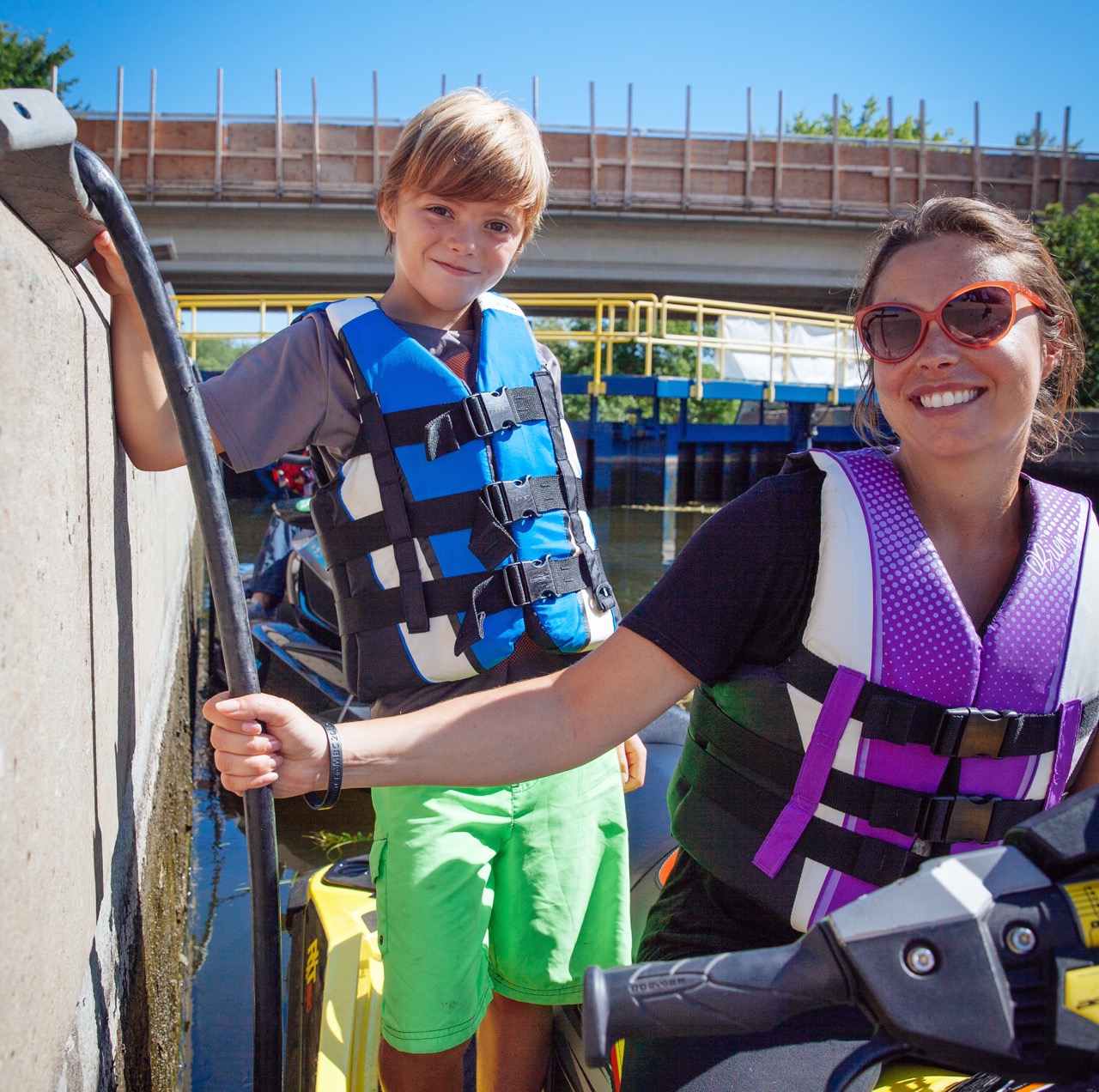 Your life may depend on choosing PFDs or lifejackets that keep you afloat while Sea Doo riding. That’s good because I can’t recall the last time I spotted a jet ski, waverunner or Sea Doo rider NOT wearing a lifejacket or personal flotation device, commonly known as a “PFD” on their PWC adventures. Maybe if recreational boaters did the same, there would be fewer drowning fatalities.

In fact, PFDs are as much a part of Sea Doo riding as are wearing helmets for snowmobiling or motorcycling. As a safety item for recreational boating, PFDs have two primary purposes during Sea Doo tours. One, to prevent drowning. And two, to ensure that the wearer is highly visible in the water if help is needed. But when learning how to choose a PFD for PWC adventures, they should not be confused with lifejackets… 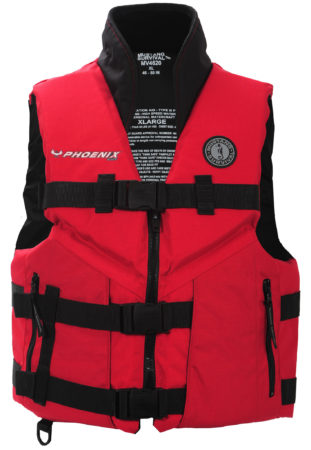 A lifejacket is designed to turn an unconscious person from face down to face up in the water, allowing them to breathe. Alternatively, a PFD is meant to keep a conscious person afloat in calm conditions. There’s a life-saving difference between these two statements.

So a lifejacket may be the best choice for for those less confident in the water – children, non-swimmers, seniors to name a few. A lifejacket, which is typically more buoyant than a PFD, usually has a more utilitarian look the more fashionable PFDs. A PFD, which has floatation material in the back of the device, is also less bulky and more comfortable. This allows for greater freedom of movement than a lifejacket. It’s a good choice for people who are confident in the water. And who understand the risks and limitations of wearing PFDs instead of lifejackets. Never put a child in an adult PFD or lifejacket. lt’s far safer to learn how to buy one specifically made for children. 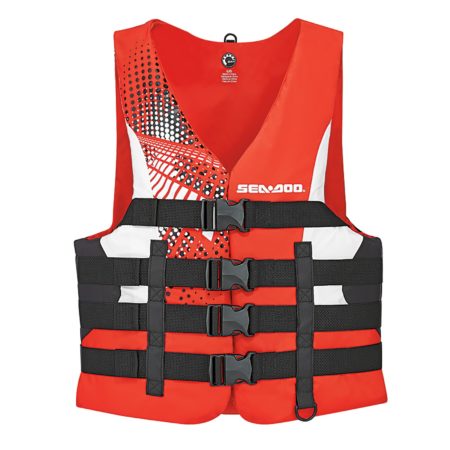 So a PFD may not save you from drowning. Especially if you are unconscious or in the water long enough to become too weak to keep your face up on your own. What’s more, the odds of being in the water longer increase for those wearing PFDs that aren’t brightly coloured, such as the trendy ones that are all or mostly black.

If you think being dark isn’t an issue, consider this. We did a test where two jet ski riders went overboard in wavy conditions. Even though we knew both were in the water, we spotted the person wearing a brightly coloured PFD much more easily and quickly.

Same goes while you’re Sea Doo riding. it’s very important to be highly visible to other recreational boaters while jet ski riding or in the water. And that’s one more reason why choosing between PFDs or lifejackets is critical. Note: Do not choose an inflatable PFD because they are illegal for PWC riding in Canada.

Whatever your choice, buckling your upper torso into a foam or neoprene flotation sheath has several other benefits for jet ski riders. It provides some protection from body blows that may result from collision, hitting the water hard or jamming forward into the handlebars. Another benefit is some sun & wind protection, plus a slight increase of core warmth on chilly days. And last but not least, you have a handy tab to fasten the end of your DESS tether cord to. This way, if you do fall off while Sea Doo riding, the cord attached to you will shut your engine off.  So your jet ski will not continue on its own and leave you stranded.

Choosing PFDs or Lifejackets – What To Look For 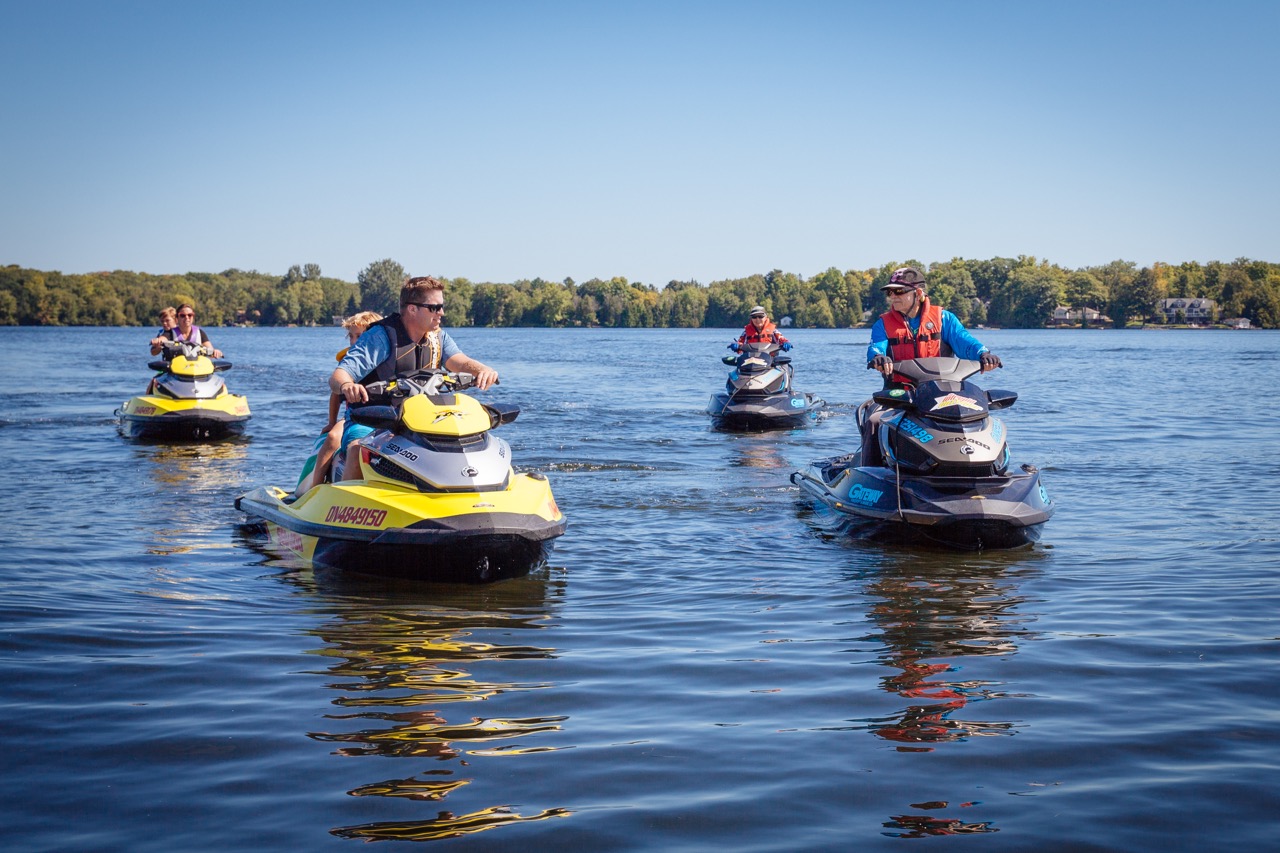 There are a variety of suitable PFDs types and models available for Sea Doo tours and PWC adventures. Be sure to choose one that’s buoyancy-rated to support your weight. I needs to fit properly by chest size (even over extra clothing layers you may wear when its cooler). Also, get a PFD that’s adjustable and has strong buckles that won’t come undone on their own. Moreover, it should fit snuggly while allowing full freedom of movement without chaffing. Bu women should consider models specifically made to fit the female form. And I highly recommend that when it comes to choosing PFDs or lifejackets, pick the brightest colour possible. Then be sure to wear it whenever you’re jet ski riding. After all, what’s more important for recreational boaters, being fashionable or being alive?