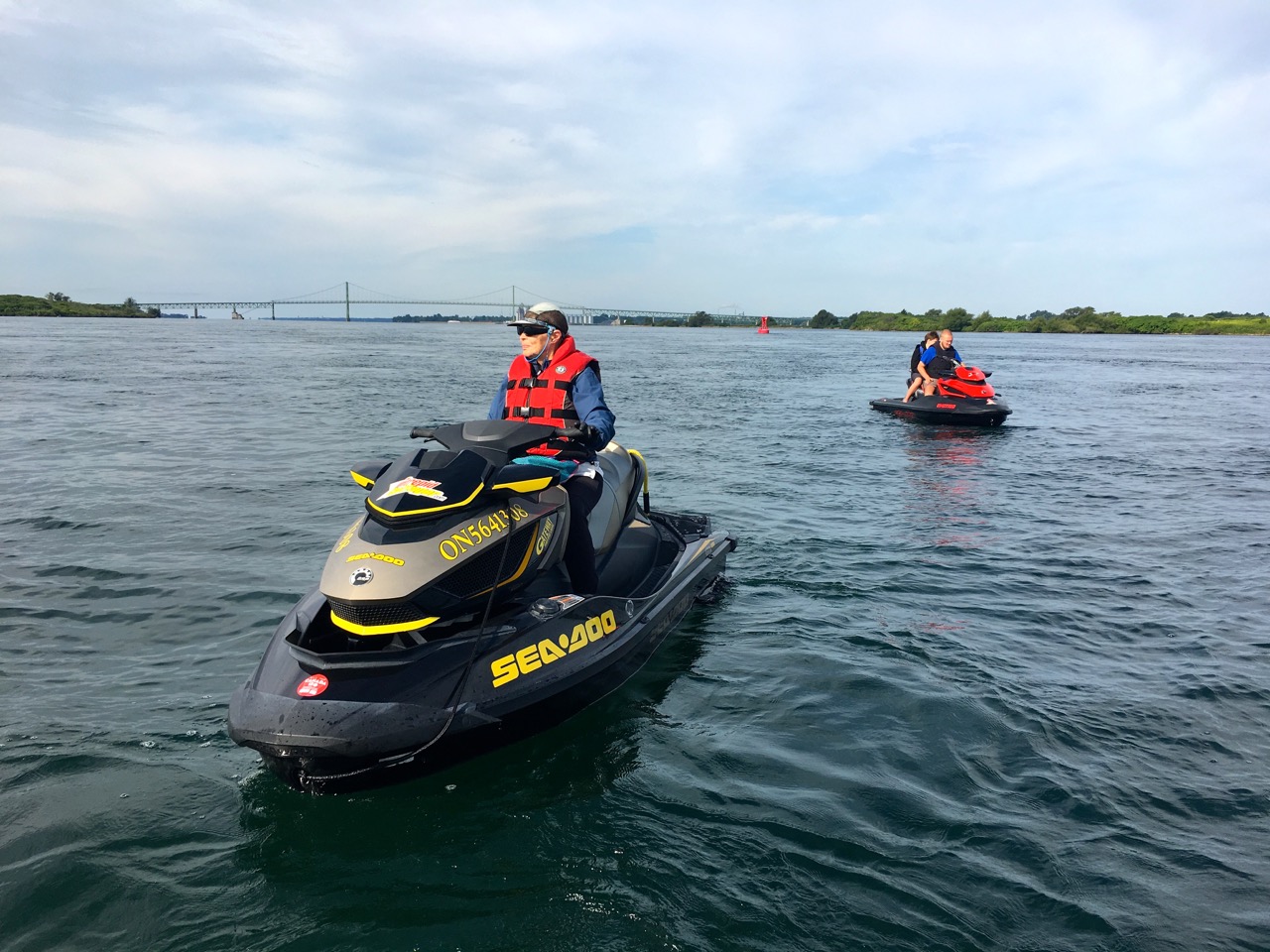 This Eastern Ontario Sea Doo Tour combines a 280-kilometer jet ski day ride on the St. Lawrence River with a 200-kilometer PWC day ride of the Lower Ottawa River. Both of these are on my list of Best River Rides for PWC adventures. We planned the St. Lawrence ride to start in Morrisburg, Ontario on day one. It travels upriver through the famous 1000 Islands to Kingston and back. The Lower Ottawa is a return ride from Hawkesbury on day two. The turnaround destination is Ottawa, which is as far as this section of river is navigable. There are no locks for recreational boaters on small pleasure craft to pass through west of the city.

We stayed in Morrisburg the night before our St. Lawrence River ride. This way, we could load up after day one’s adventure and have only a short trailer drive to Hawkesbury. That’s where we overnighted before doing the Lower Ottawa River. The Ottawa is a slightly shorter ride. So it works best for day two because we could load up up and start for home by 4 PM. In total, the time for this entire Sea Doo tour included an evening to trailer to Eastern Ontario, 2 days for river riding, and an evening drive back home after doing the Ottawa River. 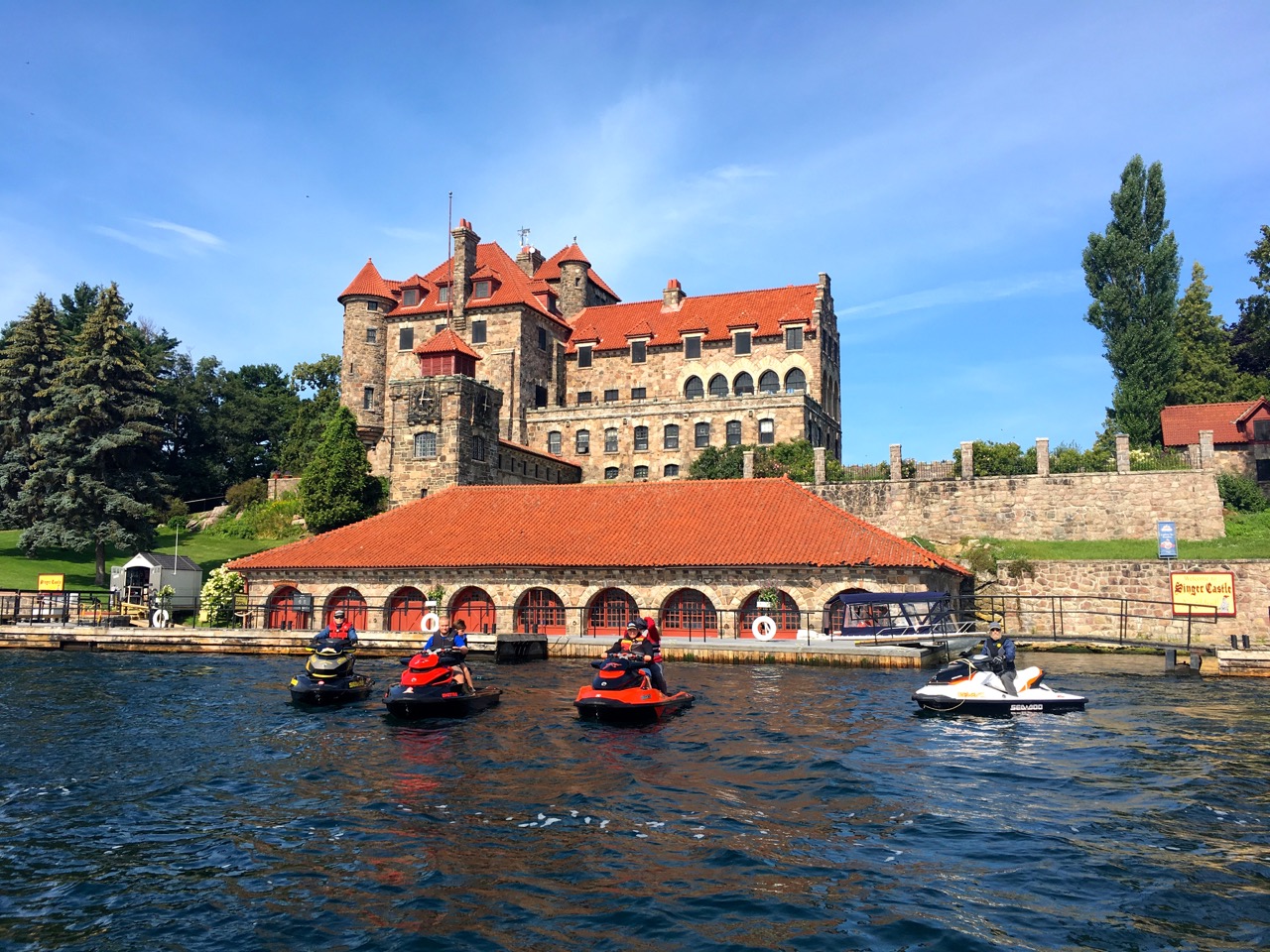 Given the daily distances, I’d suggest this is a Sea Doo tour for experienced personal watercraft operators. Riders should be comfortable cruising at an average of about 65 kph (40 mph). Participating PWCs and operators should be capable of sustaining that pace for multiple hours. Jet skis must be in top mechanical shape. This helps avoid breakdowns and achieve the best possible fuel economy.

Fuel economy is a function of water conditions, gas tank size and throttle use. My Sea-Doo GTX S 155 has a 60-litre tank. The sweet spot for optimum fuel efficiency from its 4-stroke engine is at the 65-kph average noted above.

I’ve found increasing that pace by only 10-kilometres per hour significantly decreases my fuel range. Larger horsepower engines tend to burn even more gas at higher speeds on rides like this. In Touring mode and riding solo at this speed, I can count on about 150 – 165 kilometres per tank. Running in Eco mode gets me more than 175 kilometres per tank, but the trade off is a top speed of only 57 – 60 kph.

As you can see, I likely have enough fuel on board to ride one way on each of these days without refilling. But why take that chance? On any ride of 100 kilometres or more, it’s always wise to top up on route just in case as I point out in my Fuel Economy blog. 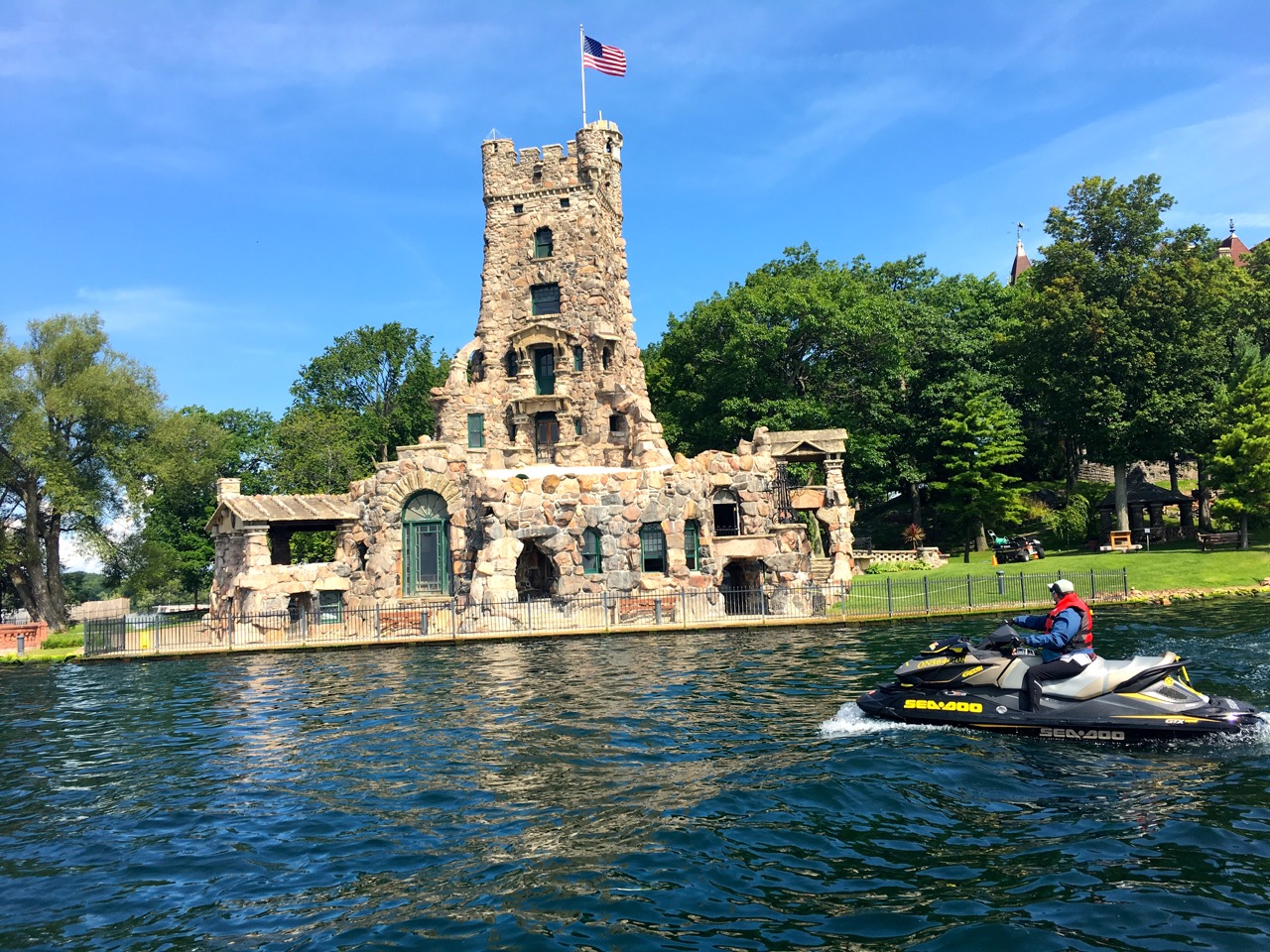 Before proceeding, I should note that we launched from Iroquois (about 20 klicks closer to Kingston), not the public dock at Morrisburg as originally planned. This change was necessary because all gates at the Iroquois Dam were closed due to exceptionally high water. Usually, we can ride non-stop through an open gate, but not this time. Consequently, our distance total for the St. Lawrence day was reduced from the anticipated 280 kilometres to a round trip of 240.

We started with full tanks. Riding against a strong current, we topped up in Rockport on the way to Kingston after some sightseeing and exploring the 1000 Islands. If necessary, we could also have refuelled in Kingston, but did not. We ate lunch at the Wolfe Island Grill.

That afternoon, we made a direct run back with the current. We stopped at Rockport again for gas. With about 30 litres left, we arrived at Iroquois (More than enough to make it to Morrisburg if we had staged from there). View map of route. 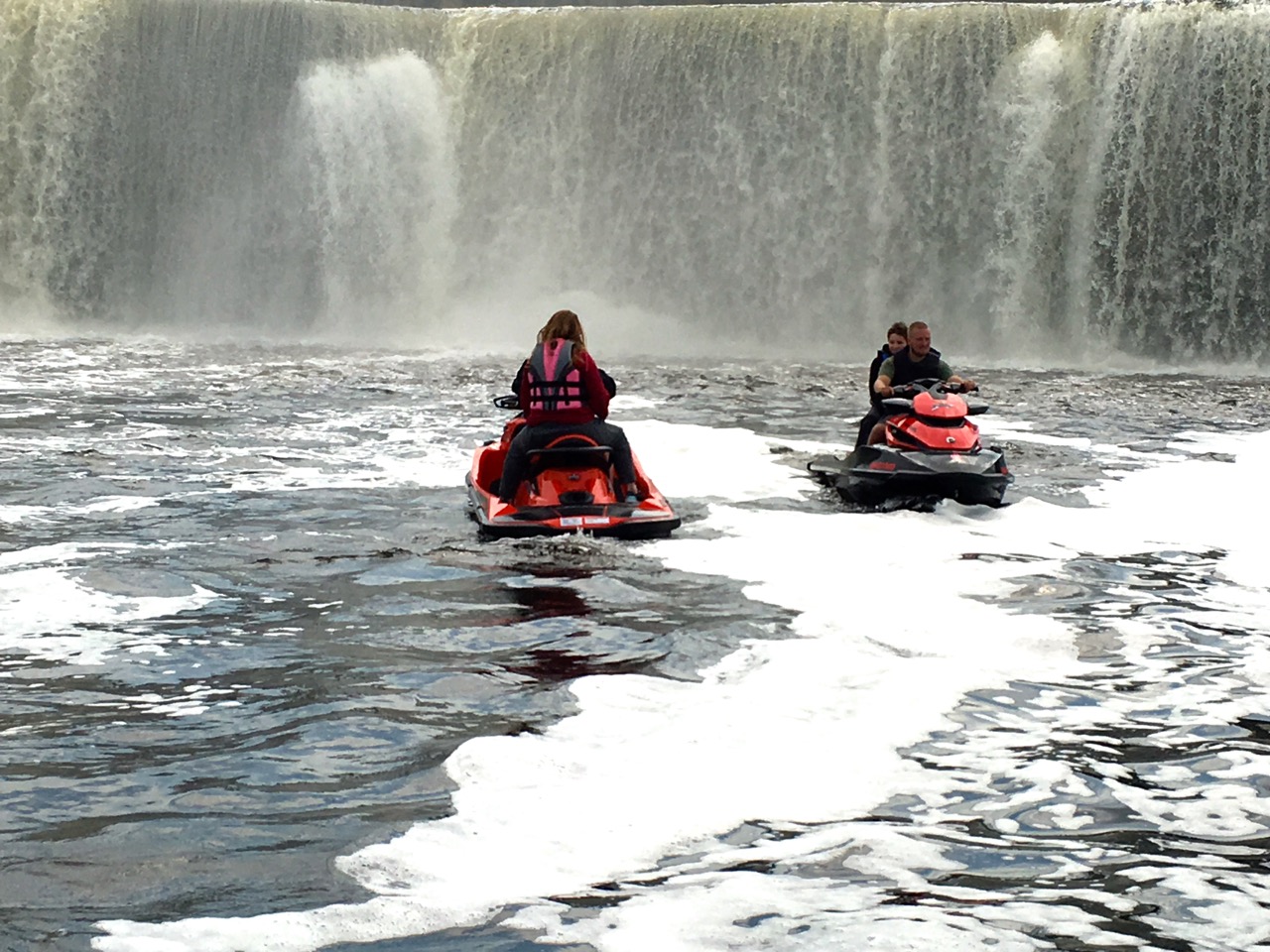 We fuelled up at a roadside gas station on the way to Hawkesbury. From their public launch next morning, we rode against the current directly to Ottawa. There, we did some sightseeing from the water – the Parliament Buildings, Rideau Falls and 24 Sussex (Prime Minister’s residence). After eating and refuelling at the Rockcliffe Boathouse Marina, we deadheaded back to Hawkesbury that afternoon to load up and trailer home. 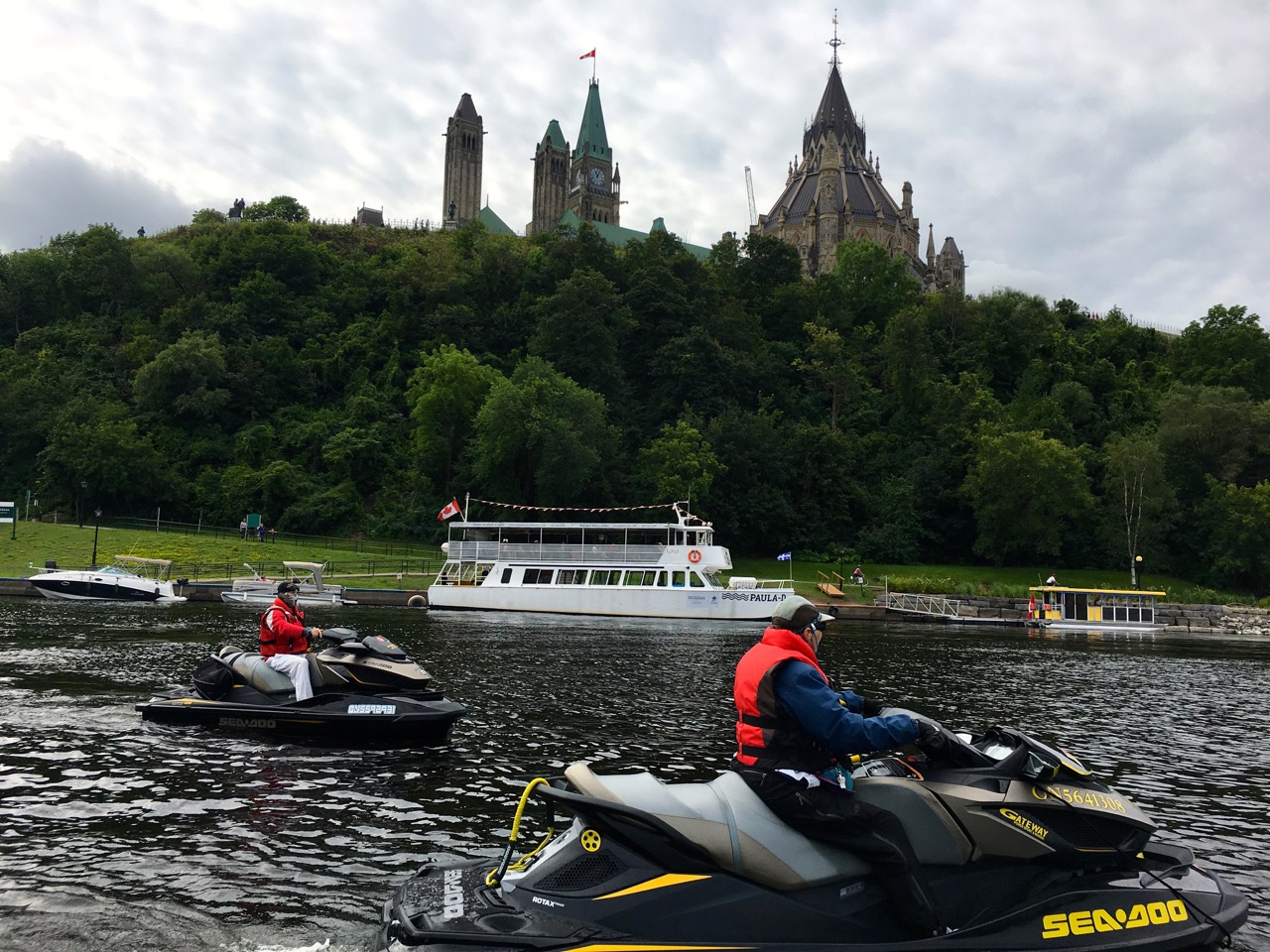 For any proficient personal watercraft operator interested in distance riding, this Eastern Ontario Sea Doo tour is a good start. Other recreational boaters will also enjoy this cruise, but will need more time to complete it. Both waterways are relatively protected from winds and have with well-populated shores. Each is also well marked with international navigation buoys. Following their main channels, water is deep with no obstacle surprises.