Today, experienced Sea-Doo, jet ski or waverunner personal watercraft riders like Tim and Diane Vandersall of Ohio are discovering that it’s also an exceptional place for unique PWC touring adventures in Canada. On their Sea-Doo watercraft, they recently toured the North Channel for six days and fell in love with its striking beauty and sparkling waters. So we did the same, with me on my Sea Doo GTX 155.

Located along the northern shore of Lake Huron, the North Channel runs 226 kilometres (140.4 miles) from Killarney in the east to Sault Ste. Marie, Ontario in the west. Meanwhile, on its southern flank, the North Channel protects recreational boaters from the full force of Lake Huron with a string of breakwater islands. The largest of these (east to west) are Manitoulin, Drummond (U.S.) and St. Joseph. 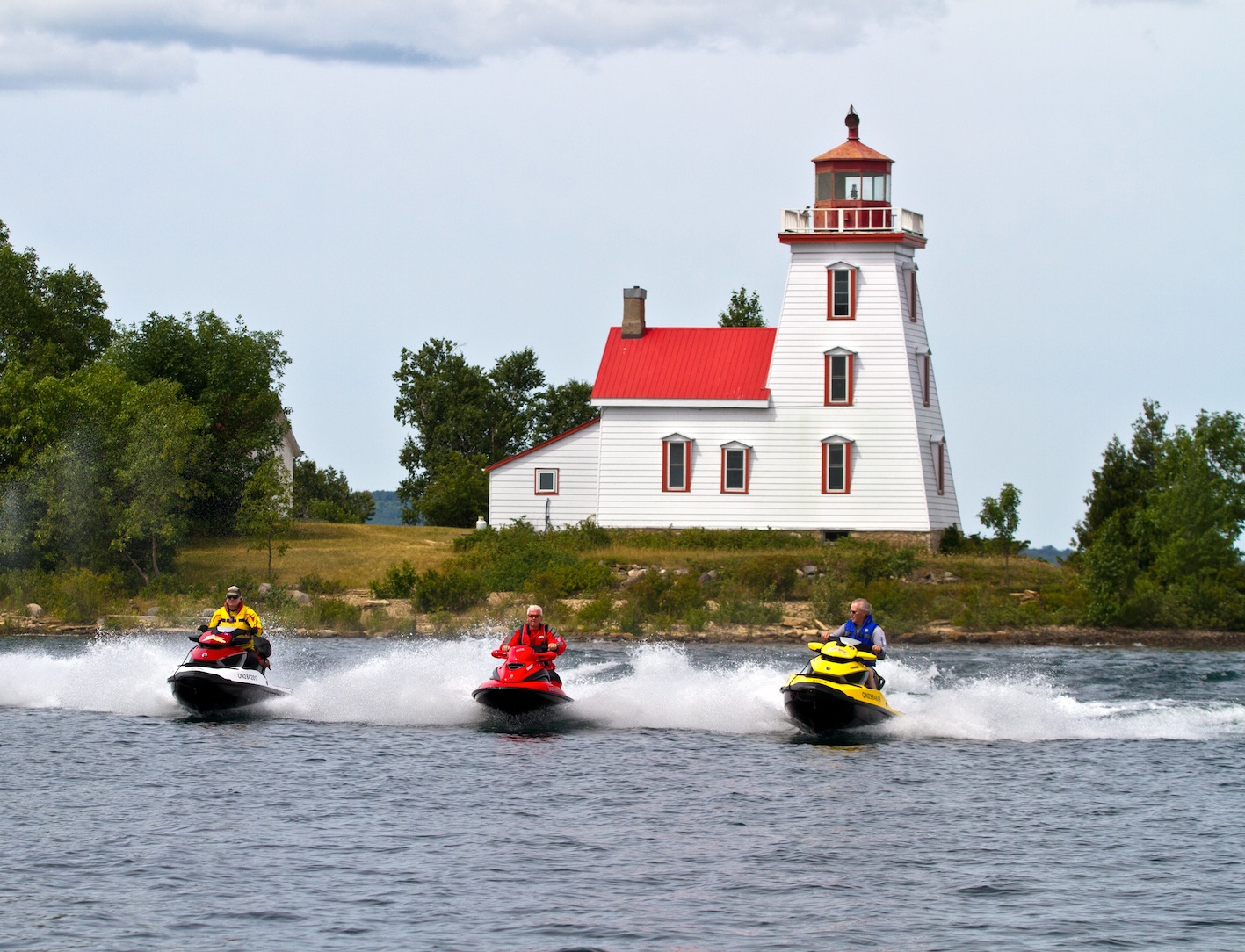 Lighthouse between Killarney and Little Current

The rugged beauty of the Canadian Shield provides incredible eye candy and a strong feeling of wilderness.

The North Channel features a seemingly endless myriad of islands, bays, channels, inlets and narrows to explore, while providing plenty of both big and small water riding choices.

Heading west from Killarney, at least 13 other Ontario communities offer waterfront facilities. In addition, these include lodgings and restaurants to welcome touring Sea-Doo riders.

As a premiere recreational boating destination, the North Channel’s main cruising routes are marked with navigation buoys. So, getting from here to there is often as simple as tracking the steady line of recreational boats and cruisers that ply these waters all summer.

We towed our Triton Trailers to St Joseph’s Island. There, our first day Sea Doo ride began at Hilton Beach Inn on the northeast side of St. Joseph Island. It’s located beside the Hilton Beach Marina, where I launched my Sea-Doo watercraft. On departure, we followed the navigation markers along the Canadian shore and main shipping channel west and north about 64 kilometers (40 miles) to Sault Ste. Marie. If you want to feel truly insignificant, try steering your jet ski alongside a Great Lakes freighter. Then, run the full length of its towering iron side!

We stopped for fuel and lunch at Bondar Marina, located opposite the entrance to the Canadian lock. Fortunately, the marina is easily spotted from the water. Just look for the large white “tent top” of the adjacent Roberta Bondar Pavilion to your starboard side.

Our return jet ski ride followed the American shore, shipping lane and markers past the Town of Detour and Drummond Island, Michigan. Then, around the south tip of St. Joseph Island and back to Hilton Beach. However, our inbound route was almost twice as far as our outbound one, and we arrived on fumes. Next time, I would divert slightly to refuel at Richard’s Landing on the northwest shore of St. Joseph before completing this counter clockwise circumnavigation of the island. Note: Fuelling up on the American side is only possible if you carry a passport or NEXUS card. Also you must check in with U.S. Customs & Immigration first, unless you are a U.S. citizen. Alternatively, if your citizenship is American, you will need to carry appropriate paperwork and check in with Canada Border Services on landing.

For this day of jet ski riding, we cruised out of Vance’s Resort in Spanish, which has housekeeping cabins and fuel on site. Located 128 kilometres (79 miles) east of the Sault on the North Shore, the Town of Spanish is also home to the Dixie Lee Chicken Family Restaurant where we ate several tasty meals. Launching next door to Vance’s, from Almenara En El Rio Marina and Campground, we headed west 37 kilometres (23 miles) to Spragge.

We had intended to swing southeast to the Benjamin Islands that afternoon. But the wind had blown up choppy waves. So, we opted instead to explore our way about 20 klicks (12 miles) up the sheltered Spanish River to the Town of Massey and back. Word has it that this river is navigable by jet ski all the way to Espanola, but be careful of occasional rocks and shoals.

After trailering south, we rode our jet skis out of the charming and bustling harbour of Killarnery. It’s probably the best known and most popular of North Channel recreational boating ports. Here, the renovated Sportsman’s Inn provided luxurious lodgings and fabulous cuisine. That day, we embarked for our Sea Doo ride from the nearby municipal launch.

Subsequently, we cruised 22 kilometres (14 miles) west to Little Current on Manitoulin Island and then explored our way back to Killarney. On route, one must-see highlight was an amazing hidden fjord called Baie Fiinn. It’s an almost river-like passageway bounded by rock walls. It runs about 13 kilometres (9 miles) to end in a clear, secluded pool favoured by recreational boaters for overnight mooring. 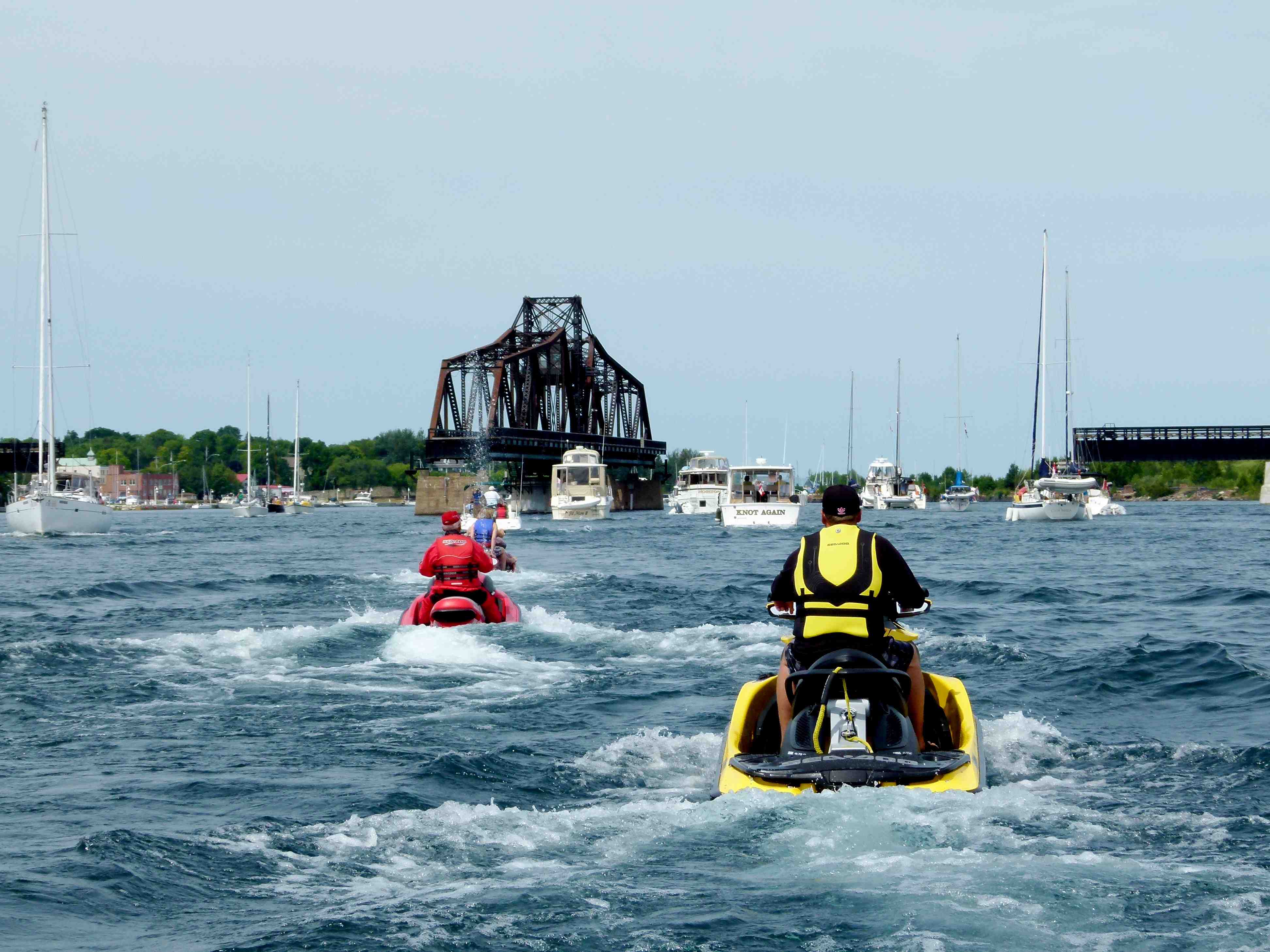 The North Channel makes for spectacular and memorable Sea-Doo touring on #ontariowaterways. It’s a multi-day jet ski destination, which can be experienced in as little as three PWC adventure days as we did. Or up to a week if you want to jet ski from one end to the other like Tim and Diane. My advice is that to do this Sea Doo tour, you should be an experienced touring PWC rider who carries charts, GPS and spare fuel on board.

As with any large marine touring region, it’s also important to check the weather very carefully, and watch out for windy days when the big water can get quite rough. That said, there are lots of sheltered back areas to explore. But as usual in unfamiliar waters, be very careful about submerged rocks and shoals.

If you’re looking for a new jet ski destination for Sea Doo riding, you gotta try the North Channel. My crew is already planning to go back and by the sound of it, so are Tim and Diane: “As an adventurous couple from Ohio with some Sea-Doo touring experience, we loved every minute of our trip, and will visit definitely visit Ontario again by Sea-Doo.” You bet!

Riders should reconfirm the routes and services mentioned in this article as they may have changed since publication.

Any map is for reference only and any marked lines or locations are not intended as an exact or accurate depiction of positions.