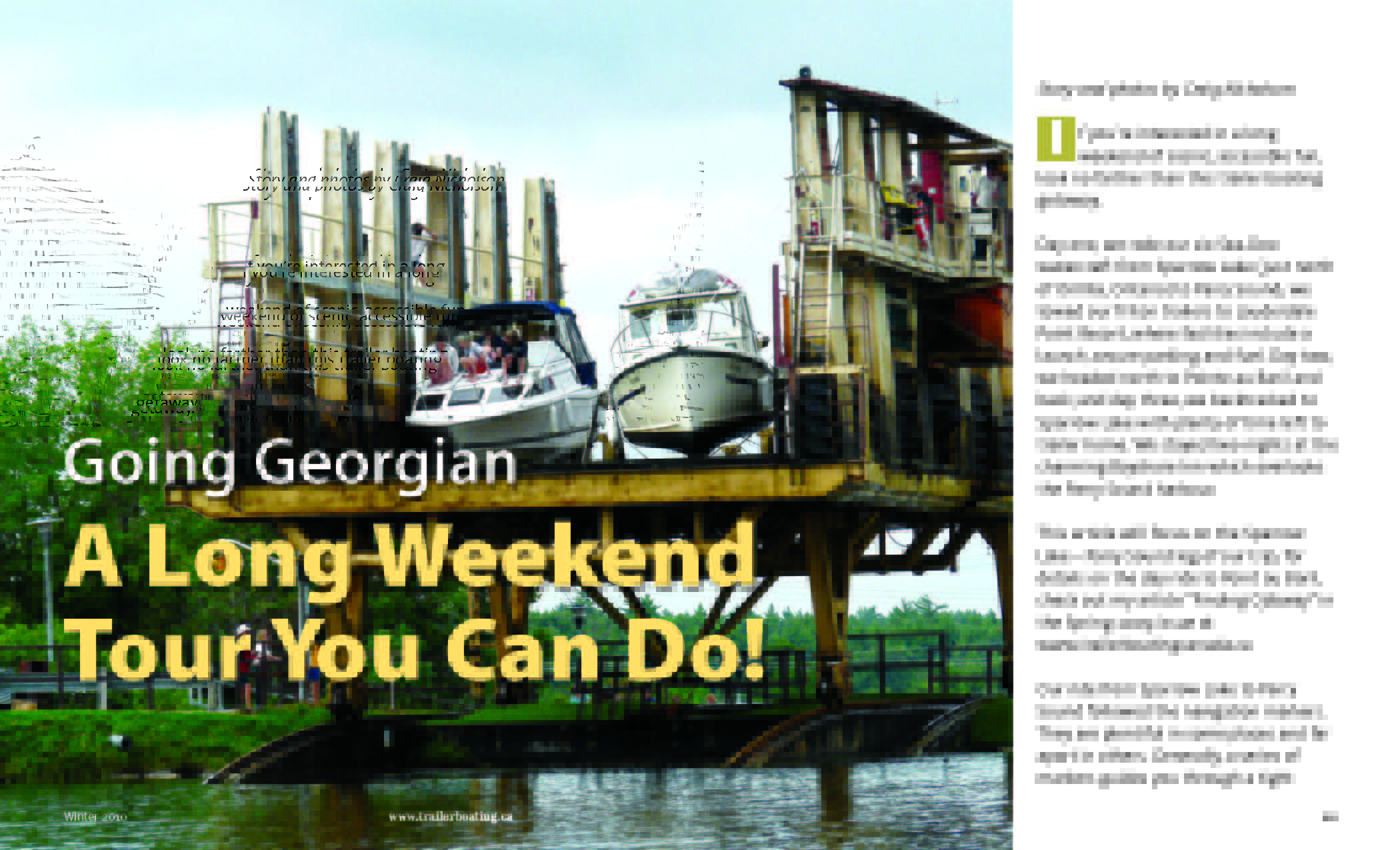 This Severn River South Georgian Bay Sea Doo Tour is a great self guided ride and PWC adventure. Especially if you’re interested in a long weekend of scenic, accessible fun in Ontario, Canada on your jet ski. In fact, we rode our six Sea-Doo watercraft from Sparrow Lake (just north of Orillia, Ontario) to Parry Sound.

We had towed our Triton trailers to Lauderdale Point Marina & Resort, where recreational boating facilities include a launch, secure parking and fuel, available to anyone on a Sea Doo, jet ski or waverunner personal watercraft.

The first part of our Sea Doo ride followed the western-most section of the Trent-Severn Waterway. Here the Severn River meanders along until spilling into Severn Sound. Along the way, we Sea Doo riders followed the recreational boating markers through its many rock cuts and quiet bays to the picturesque Gloucester Pool (check out Whites Falls at the north end!) The shore along this route is a mix of Canadian Shield wilderness interspersed with clusters of cottages. Fuel and food are available at numerous recreational boating marinas along the way. We usually stop at either Port Severn or Honey Harbour to eat. 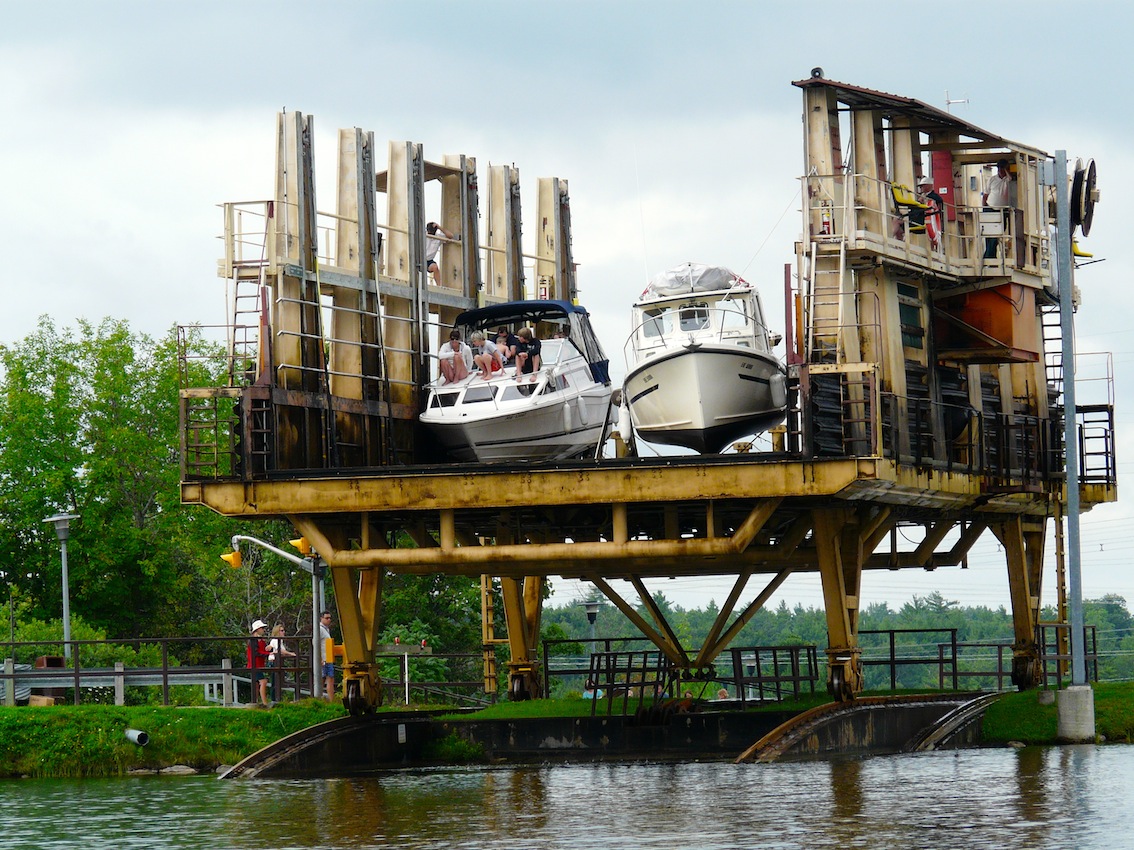 The beauty of Sea Doo riding is that every lock has room for you. Even when other boats have to wait for the next lock-thru. Good thing, because this Severn River stretch also includes a massive lock at Swift Rapids (#43) and a smaller one at Port Severn (#45). But the real eye-popper is the Big Chute Marine Railway (#44). Our Sea-Doo watercraft floated on to this engineering marvel and were lifted clear of the water (larger boats are in slings). Then the whole rig descended over 17 metres on rail tracks down a hillside before re-entering the water again where we floated off. If you think a big cruiser dwarfs you on the water, try sitting dry-docked almost under one on the marine railway!

Our Sea Doo ride from Sparrow Lake to Parry Sound followed the navigation markers. They are plentiful in some places and far apart in others. Generally, a series of markers guides you through a tight channel. Or takes you through a change of course. If the next marker is not immediately visible, then your course is likely straight ahead and could be denoted by either buoys and/or shore markers.

It’s always a good idea to carry charts with you. I study them the night before and make note of the key buoy numbers where significant changes of course occur. There are plenty of rocks and shoals between Severn Sound and Parry Sound. But as long as you stick to the main channels as we did on our Sea Doo ride, you shouldn’t have a problem. Usually, many other large boats are making a similar journey. So when in doubt you can easily follow their lead. Carrying a GPS unit with the proper charts uploaded is also valuable. 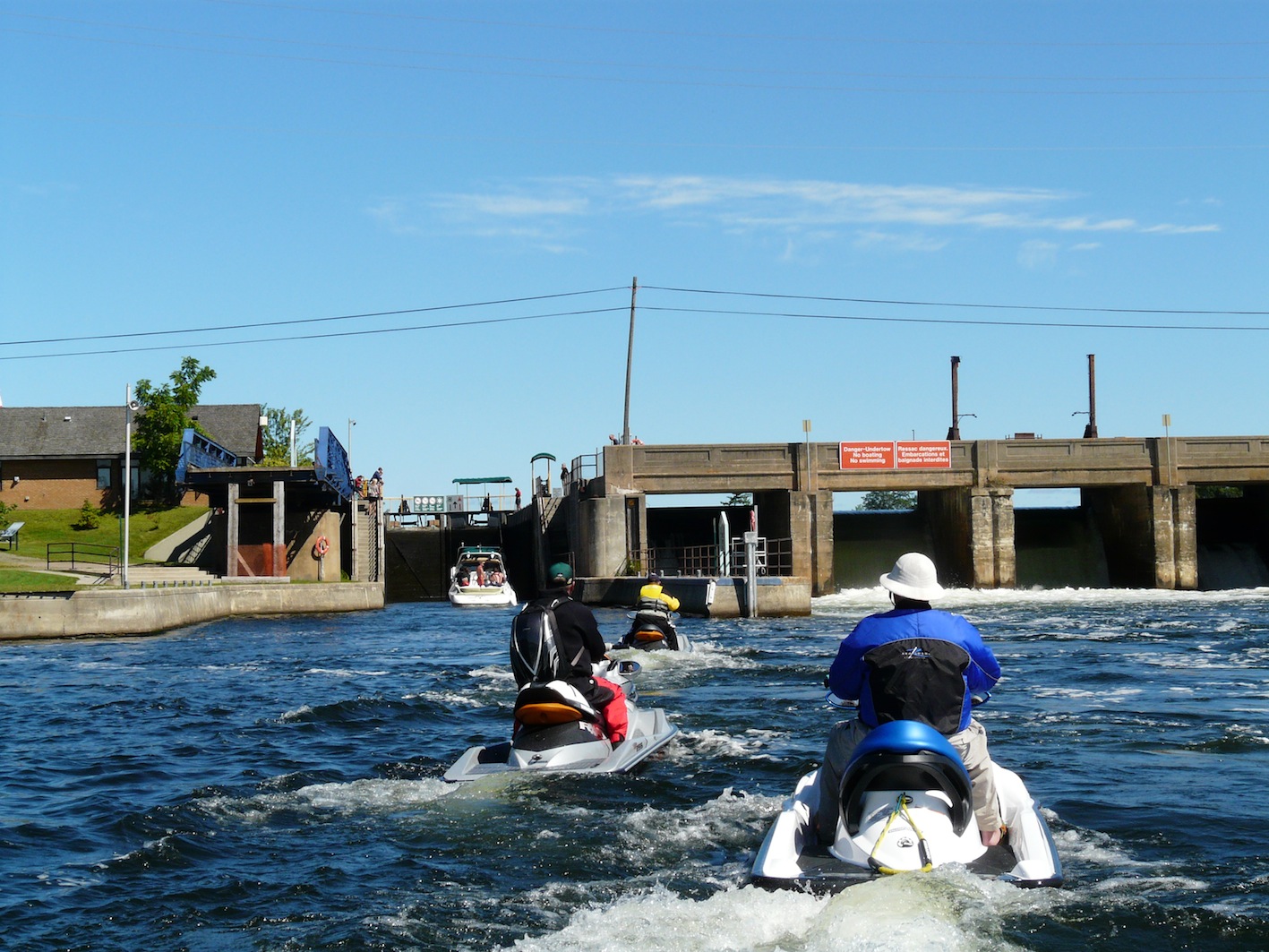 We passed under Highway 400 after the lock at Port Severn. Then we followed the buoys into the Potato Channel that arrows west through Severn Sound. This is where the waterway changes from sheltered river to open water. The secret from here to Parry Sound is to follow the inner channel that meanders behind islands and remains largely protected from the big waves of Georgian Bay proper. That’s why we made a sharp turn to starboard about one half a nautical mile past marker C50 to swing north toward Moore Point and followed the channel into Honey Harbour. Once you pick up the row of markers near Moore Point, keep a sharp eye out to stay between them. Because they meander around a bit to avoid shoals. Once again, plenty of marinas offer fuel and food in the Honey Harbour area. Just be careful to obey the slow speed zones as the marine patrols are active here. Especially in the vicinity of Delawana Inn. 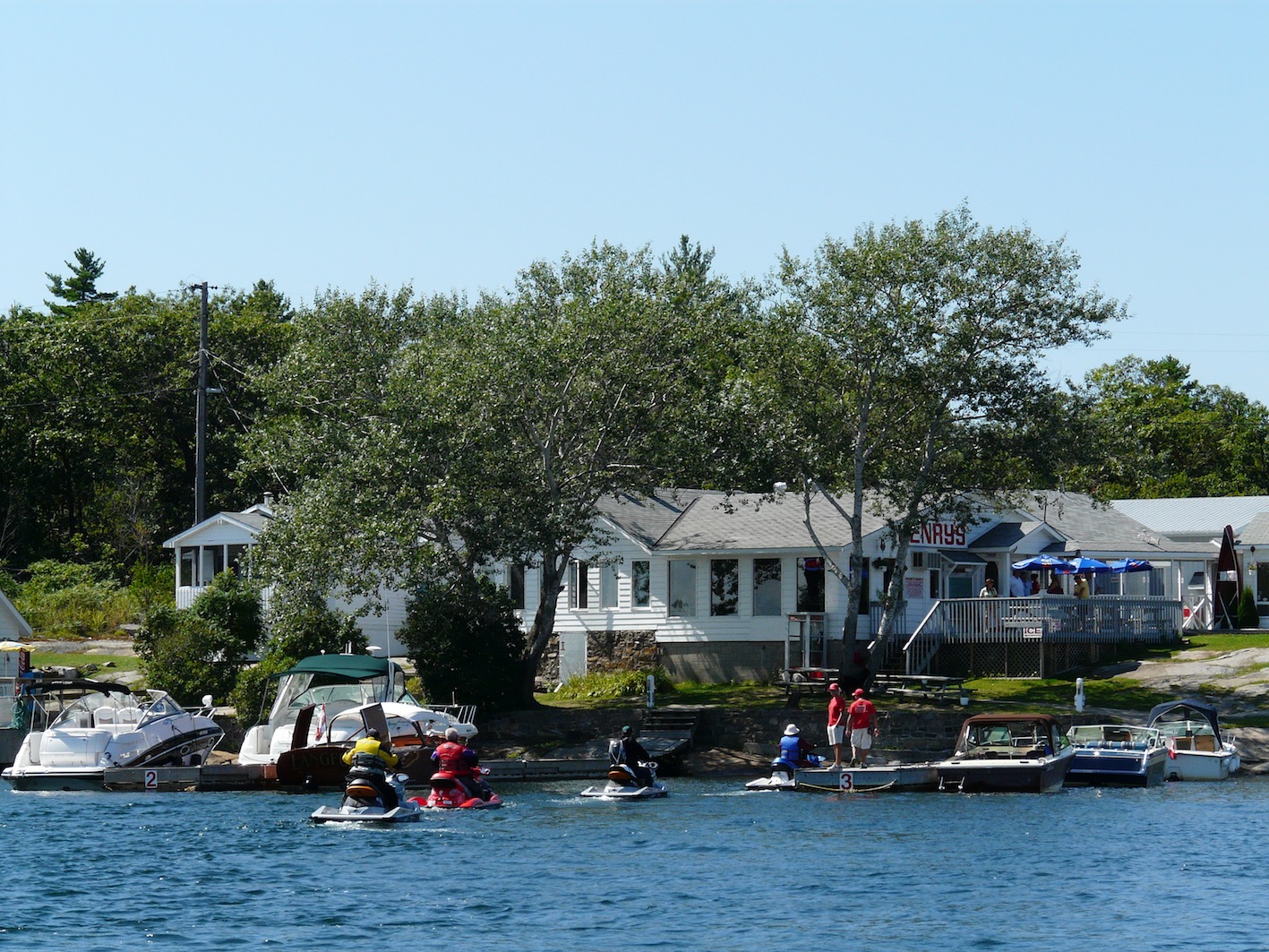 An hour or so north of Honey Harbour is THE place to stop for lunch. The world famous Henry’s Fish House is located on Frying Pan Island at Sans Souci (on your port side, just past marker C180). This is the heart of Georgian Bay’s equally renowned 30,000 Islands. It’s also home to the best pickerel eating you’ll every experience. The generous portions, excellent quality and outstanding hospitality make Henry’s an unforgettable treat that’s worth the journey all on its own. (Note: double check that the restaurant is open before going).

The 21 or so kilometres from Henry’s to Parry Sound follows channels through many of the 30,000 Islands. It’s well marked with buoys and its Group of Seven shores are dotted with cottages. Before long, we crossed under the swing bridge to Parry Island on our Sea Doo ride and swung into the Town of Parry Sound harbour. We fuelled up at Parry Sound Marina.

After a full day of Sea Doo riding, Parry Sound is an ideal stopover. We took in a free jazz concert on the patio at the Stockey Centre and admired vintage vehicles at a waterside classic car show. So plan to dock overnight at Big Sound Marina and stay at the Bayside Inn. Just give Jeff a call and he’ll pick you up at the marina! 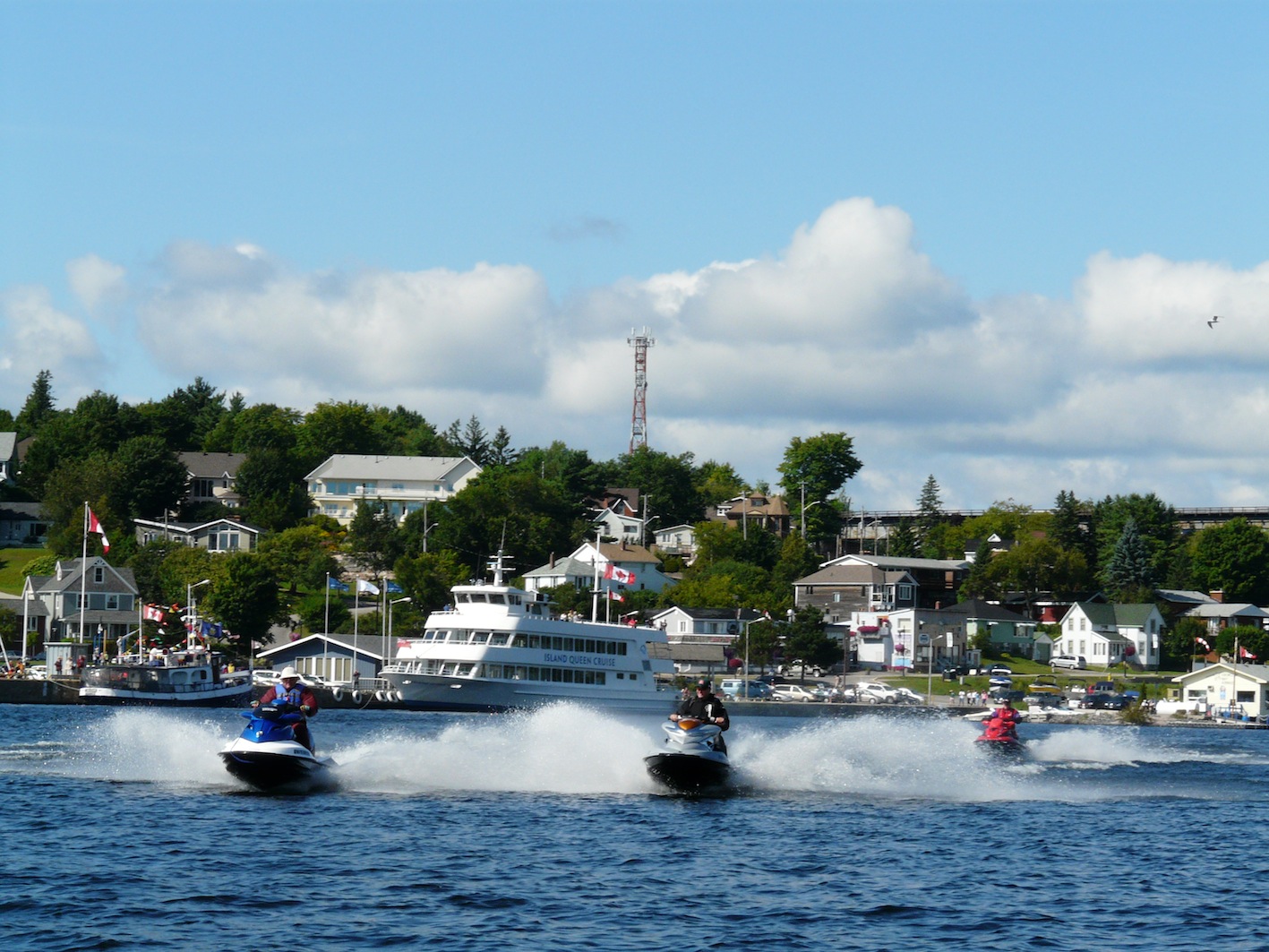 Parry Sound is the area’s main commercial hub. A town of 18,000 permanent residents, it swells to about 60,000 in the summer. It boasts attractions like the Stockey Centre for the Performing Arts and the Bobby Orr Hall of Fame. Plus, it offers some mighty fine dining and we sampled two exceptional choices: Wellington’s Bar & Grill; and the Bay Street Café.

If you have three days, spend the middle day Sea Doo riding to the Ojibway Club near Pointe au Baril and back (see my article Georgian Bay North Sea-Doo Tour). Then stay over a second night at the Bayside Inn. If you only have two days of Sea Doo riding available or want a more leisurely cruise, simply do the return Sea Doo ride from Parry Sound to Sparrow Lake the next day.

There are two key points to remember about Sea Doo riding Georgian Bay. It can get rough when it’s windy. So try to pick calmer days for your Sea Doo ride. Another good reason for riding smoother waters is that it’s much easier to spot the various marker buoys that line the main channels to guide you along. If water levels are low, you don’t want to stray much off the main course.

I should also add that if you only have one day for Sea Doo riding, just do the Sparrow Lake – Port Severn run (also a good choice for days that are windy). Or launch from Port Severn and ride up to Henry’s for lunch and back, a perfectly doable one day outing.

Whatever you choose, this Georgian Bay South Sea-Doo Tour will keep you coming back for more!