The Best Way To Fasten Jet Ski To Trailer… 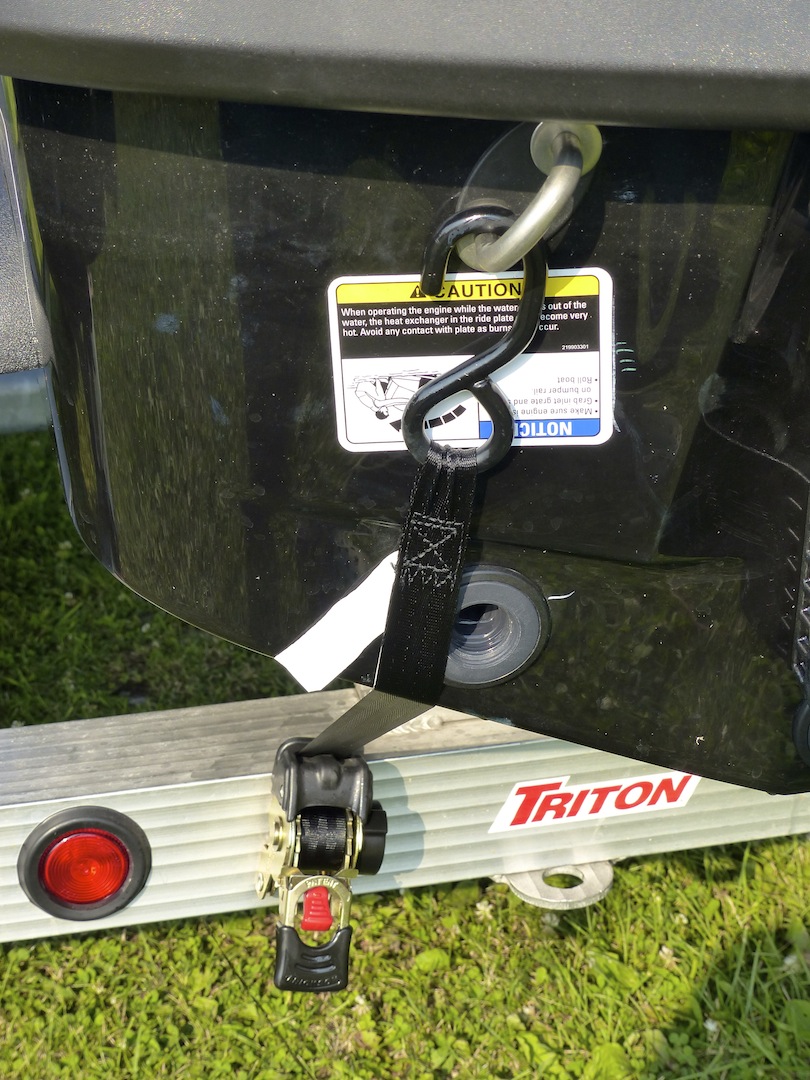 Have you ever tried Retractable Ratchet Straps? Used to be that every time I fastened the backs of my two Sea-Doo GTX 155 watercraft to my Triton PWC Trailer, I thought to myself…“There must be a better way!” Like experienced Sea Doo riders and jet ski beginners, I’d tried ropes, regular tie down straps and ratchet straps on my PWC adventures. None are as quick or easy as I’d like.

Sure, if I take my time, I can make my personal watercraft secure. But there’s too much fiddling around and untangling of straps. Then I spotted a Triton trailer with built in tie downs (now included on most Triton PWC Trailers) and discovered the functionally named “Rear Retractable Ratchet Straps”. Here’s my product review…

Rear Retractable Ratchet Straps bolt on to the trailer frame. So they’re always in the right place and handy when needed. One under each rear corner of each jet ski, four in all on a 2-bed trailer. The ratchet mechanism works similarly to others. It enables me to loosen them off or tighten them up conveniently. And because of their location, the Rear Retractable Ratchet Straps snug each Sea Doo down effortlessly aided by their own weight of gravity. So far they are working great. And I love not having to be constantly taking off and messing with my old tie downs. But are there any downsides for self guided, Sea Doo tour adventures or recreational boating?

One is that because Rear Retractable Ratchet Straps are permanently installed, I have to be careful with the hooked ends after they are unhooked from each Sea Doo. They can’t be left dangling loose. Because they might get sucked up into the impeller when a PWC is backed off (or driven on) the trailer. Or dragged down the highway while trailering. To avoid this, I hook the loose ends onto the trailer frame and take up any slack with the ratchet.

Another potential downside is getting the ratchet mechanisms wet. Over time, this could lead to rust and seizure. Same goes, I guess if the trailer is used on many dusty roads where grit and sand could jam it up. I’m trying to avoid either complication with generous sprays of WD40. But only time will tell if this is the best way to keep the ratchets operating properly.

Finally, although I haven’t encountered this problem yet with the Rear Retractable Ratchet Straps, I have occasionally had trouble getting other ratchets to release after being tight while transporting my PWCs. I finally figured out that sometimes, the jet skis might have shifted forward slightly. This put more strain on the ratchet mechanism than was present when I originally closed the lever. I resolved this by either shifting the unit a bit or having someone sit on its end to lower it fractionally. It’s also less likely to happen if I snug up the front end to the trailer prior to fastening the back.

These considerations aside, I don’t have to be concerned about losing a tie down anymore. Also, releasing and fastening my Sea Doo watercraft at any launch is a breeze. My verdict is that this added value product is a must-have for the ease and convenience of jet ski riders. Especially if you do a lot of towing like I do for your Sea Doo tours! Rear Retractable Ratchet Straps are available from your Triton dealer and included on most of their PWC trailers.